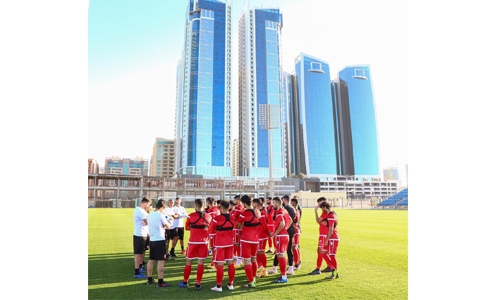 Portuguese tactician Helio Sousa supervised the session along with his coaching staff. The nationals are set to hold their camp until the end of the month.

They will be alternating their practice venues between Najma and the Khalifa Sports City stadium in Isa Town.

Bahrain are set to play two international friendlies during this period. First, they will go up against Syria on March 25 and then lock horns with Jordan on March 30.

Both tune-ups will take place at the National Stadium in Riffa. Sousa has named 26 players for the local camp, which is their second gathering of the year.

It is being held as part of their preparations for the two friendly games, as well as their official matches coming up later this year. These include their three remaining fixtures in joint-qualifying for the FIFA World Cup 2022 and AFC Asian Cup 2023, which are set to be played in June.

The Bahrainis are in Group C of joint-qualifying alongside Iraq, Iran, Hong Kong and Cambodia. Their last three games, as currently scheduled, are to be against Cambodia on June 3, Iran on June 7 and then Hong Kong on June 15.