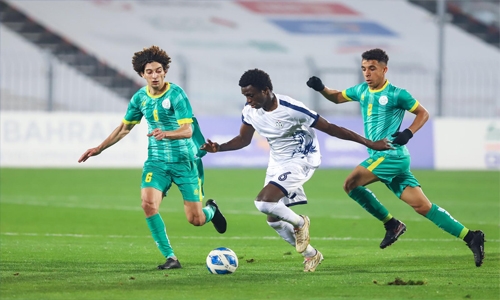 Nigerian professional Vincent Emmanuel and Malo August were both on target in the second half to help the victors claim the hard-earned result.

Malkiya tried to mount a comeback and were able to score late on from the penalty spot, but they could not find an equaliser towards the end.

The win was Najma’s third in 10 matches as they improved to 12 points on the league table.

Malkiya suffered their sixth loss in 10 games and stayed bottom of the standings with six points.

He was on the receiving end of a cross from the left-wing and was able to find the net with his second effort after his initial volley was blocked by a Malkiya defender.

Najma then doubled their advantage in the 73rd minute with an August rocket from the outer edge of the penalty box.

His well-hit effort flew directly to the top-right corner of the goal, leaving Malkiya goalkeeper Mohamed Ahmed Marhoon no chance.

Malkiya were able to get a goal back in the 80th minute after substitute Victory Omodiagbe, also from Nigeria, was taken down in the area by Najma’s Redha Hassan Ali.

Isa Abdulwahab Kaadhem stepped up to take the penalty, and he fired the ball right into the left of the net.

League action continues tonight with three matches on the cards.