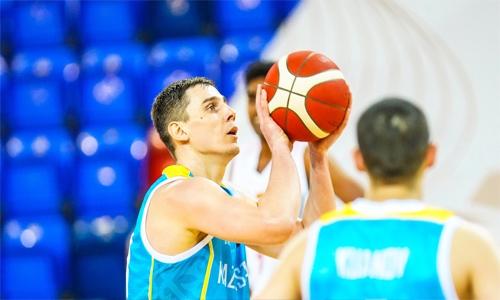 Kazakhstan crushed Sri Lanka 111-52 yesterday as the third window of qualifiers being held in Bahrain for the FIBA Asia Cup 2021 got underway at the Khalifa Sports City arena in Isa Town.

The Kazakhs took control of the game early and never looked back.

They scored the first eight points and enjoyed leads as big as 60 late on, as they dominated every aspect of the contest.

All 12 of Kazakhstan’s players made it onto the score sheet and they each registered at least five markers.

Anthony Clemmons had a team-high 14 points, which included four three-pointers, while also dishing out five assists.

Vadim Chsherbak came off the bench to contribute 13, while Anton Bykov had 12.

Fernando Nimesh paced Sri Lanka in the loss with 13 markers.

The Kazakhs claimed their second win in three contests with the result and moved atop Group F with five points.

Sri Lanka suffered their third successive loss as they stayed winless at the bottom of the group.

Kazakhstan will be looking to continue their winning ways today when they take on Palestine in the Bahrain qualifiers’ lone fixture.

The contest is scheduled for a 4 pm tip-off, and it will be held behind closed doors.

Palestine head into the clash with a 1-1 win-loss record.

They will be looking to bounce back against the Kazakhs, who narrowly won their first meeting 79-76 last year in Astana.