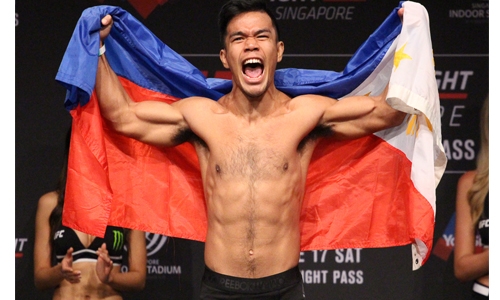 The reigning Brave Fighter of the Year, known as “Dy Incredible”, sealed a fresh and exclusive three-year contract that also guarantees him five bouts under the Bahrain-based promotion.

Fresh from a strong showing in 2020, despite the challenges presented by the coronavirus pandemic, the 29-year-old Dy (14-9) said he appreciates the confidence that Brave has given him and that he is looking forward to progressing this year and beyond.

“This organization took care of me when I was at the lowest point of my career as a professional fighter,” said Dy in a release announcing his stay with Brave.

“Without hesitations, they gave me the opportunity to write a new chapter in my story as a combat sports competitor. Here I am today, one of the best fighters on their roster and in the world.

“It’s an honour to represent this organization on the global stage of this sport. I will surely do my best to give the fans and my supporters a performance to remember every time I step inside the cage.”

Considered one of the title contenders in the lightweight division, Dy finished 2020 strong after months of limited activity because of the restrictions forced by the pandemic.

He had two straight victories in September and November en route to willing himself as one of the noteworthy fighters in Brave. Dy first beat Polish knockout artist Maciej Gierszewski via a split decision then dominated John Brewin of New Zealand en route to a unanimous decision victory.

His efforts did not go to waste as he was named Brave Fighter of the Year. Dy made his Brave debut in 2017 and did the rounds of different promotions after.

In 2020, he moved up to the lightweight division, from featherweight, and it is paying dividends for him so far.

This year, Dy said one of the goals for him is to get a shot at the lightweight title currently held by Amin Ayoub of France just as he expressed readiness to whomever the promotion lines him up with.

“I want that title shot in 2021. But if Brave CF thinks I have to prove it again, then so be it. I really don’t mind. Line them up and I will keep knocking them down.”