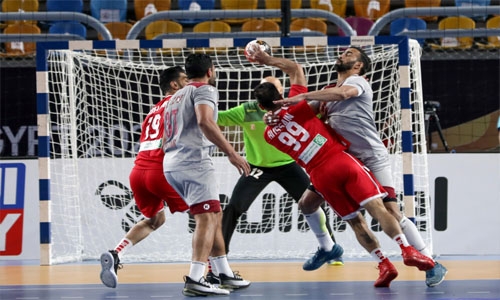 Bahrain missed out on a golden opportunity to claim their first win in the main round of the 27th IHF World Men’s Handball Championship in Egypt last night following a 23-28 defeat to Qatar at Cairo Stadium Indoor Halls Complex.

It was a match-up between Asian powerhouses and the Bahrainis had a good start and they took a single-goal lead, 14-13, at the break. But they then conceded six successive goals to start the second half, which helped the Qataris blow a close game wide open.

The nationals never recovered from there and Qatar led by as many as seven the rest of the way.

Bahrain had one final push in the game’s final minutes, but they could only get back to within four goals.

The result was the second successive loss for the national team in the competition’s main stage, having previously bowed to European giants Croatia.

They remained on zero points in the group table from four fixtures, as their losses from the preliminaries to defending world champions Denmark and Argentina have been carried over.

Qatar won its first game in the current stage and they improved to four points. Bahrain has one final match to play in this phase.

It will be tomorrow against Japan, scheduled for a 5.30 pm start, Bahrain time.

Bahrain faced a 5-8 deficit to begin yesterday’s match, but gradually fought their way back and a fastbreak goal from Mahdi Saad tied the proceedings at 11-all. Skipper Hussain Al Sayyad then scored with a penalty shot to give the Bahrainis their first lead of the contest at 13-12, before goals from Qatar’s Yassine Sami and Bahrain’s Mohamed Ahmed closed out the opening 30-minute period.

Starting the second half, Komail Mahfoodh gave Bahrain a 15-13 advantage, but after Mohammed Mirza put Bahrain up 16-15, the Qataris made their game-changing rally as they powered ahead 21-16.

Qatar continued their strong play and goalkeeper Danijel Saric made several fine saves. Hasan Alfardan was able to cut the deficit for Bahrain to 22- 26 with just under three minutes to go, but that was as close as they could get.

Saad, Ahmed Fadhul and Ali Mirza all scored twice, while also making it onto the scoresheet with a goal apiece were Alfardan, Mohammed Mirza, and Mohamed Abdulredha. Cuban-born players Rafael Capote and Frankis Marzo paced the Qataris with nine and eight goals, respectively.

Capote was named the man of the match. Having already been eliminated from quarter-final contention, the Bahrainis are now playing to gain their best placing on the 32-team competition’s final classification.