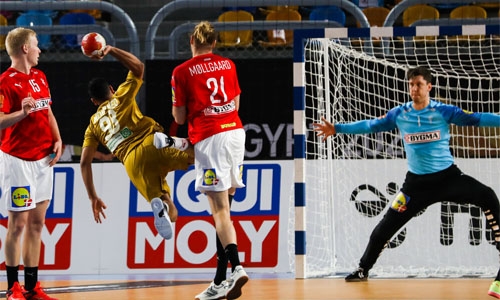 Bahrain suffered a tough 20-34 loss to Denmark last night in their opening match of the 27th IHF World Men’s Handball Championship, being held in Egypt.

Denmark enjoyed a comfortable 19-10 lead at the half and extended their advantage over the final 30 minutes, en route to closing out the convincing result. The Bahrainis tried hard to make a significant challenge but the European powerhouses showed why they are the defending world champions.

Denmark right back Mathias Gidsel was named the Player of the Match. The game was the first for both teams in Group D of the tournament’s preliminary round.

Bahrain will be hoping to bounce back from this setback when they take on South American champions Argentina tomorrow, scheduled for an 8 pm throw-off.

Denmark will be looking to maintain their winning ways when they face DR Congo later the same night. The Argentinians were 28- 22 victors over Congo in yesterday’s other Group D game. Bahrain is in Cairo with a 20-player squad.

They are coached by Icelandic tactician Halldor Johann Sigfusson.

This year’s world championship marks the fourth appearance for the national team in the premier International Handball Federation (IHF) tournament.