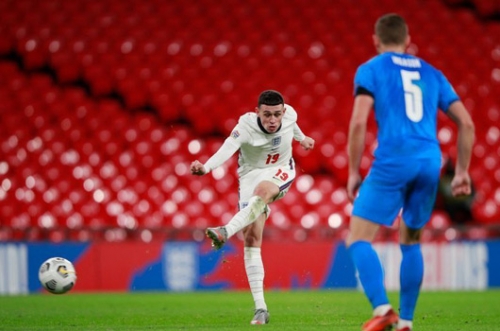 Romelu Lukaku played the starring role for Belgium in their 4-2 win over Denmark while Italy stretched their unbeaten run to 22 games after beating Bosnia 2-0 as both teams made their way into the semifinals of the UEFA Nations League on Wednesday.

Lukaku extended his record scoring form for his country with a second-half double as Youri Tielemans and Kevin De Bruyne also netted for Belgium.

Denmark scored through Jonas Wind after 17 minutes, heading home from close range, and Belgium gifted them a second with a comical own goal credited to Nacer Chadli four minutes from time.

Belgium finished five points clear at the top of League A Group 2 and will meet world champions France and former World Cup winners Italy and Spain in the final four next October.

Andrea Belotti broke the deadlock in the 22nd minute and Domenico Berardi added the second with a magnificent volley midway through the second half as Italy topped Group A1 with 12 points from six games.

Italy sealed top spot in Group 1 above the Netherlands, which beat Poland 2-1. That group winner had been pre-selected to host the Final Four next October.

Belgium and Italy join Spain and France, who topped groups that finished Tuesday. That means the tournament will feature the winners of the World Cup in 2006, 2010, and 2018.

A total of 18 Nations League games were played Wednesday to complete a difficult 2020 program for Europe’s 55 national teams amid a spike in the coronavirus pandemic.

Phil Foden scored a late second-half double as England beat Iceland 4-0, with both teams wrapping up their Nations League campaigns in Group A2 with only pride to play for.

Foden became the youngest Englishman to score more than once at Wembley for his country as he netted a brace in the final 10 minutes of the game. His first goal in the 80th minute was first for England.

England took control when West Ham United’s Declan Rice glanced in a header from a free-kick on 20 minutes and the lead was doubled four minutes later when Chelsea midfielder Mason Mount pounced on a bouncing ball in the box to finish calmly.

Foden's goals came after Iceland had been reduced to 10 men with Birkir Már Sævarsson shown a second yellow card in the 54th for tripping Bukayo Saka.

Substitute Jadon Sancho combined with Saka before setting up Foden to sweep into the net in the 80th and he fired in the fourth from outside the penalty area four minutes later.

I’m tired of being blamed for everything: Messi hits out at critics