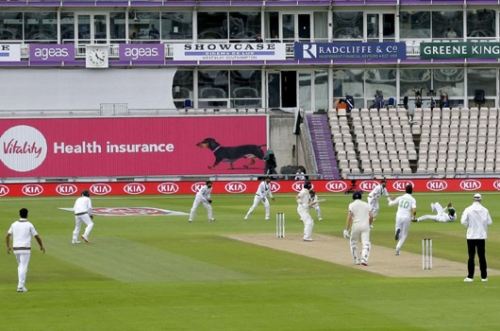 The England and Wales Cricket Board said Wednesday they hoped spectators would return to matches next year as they announced a full international program for 2021 culminating with a five-Test series at home to India.

Unlike this year's coronavirus-hit schedule, where a full set of men's international matches were played behind closed doors at Old Trafford and Southampton, the ECB is now planning to take fixtures all around the country as in a normal year.

The centerpiece of next year's program is a Test series against India in August and September, with matches at Trent Bridge, Lord's, Headingley, the Oval, and Old Trafford.

Meanwhile, the white-ball series against Sri Lanka and Pakistan are scheduled throughout June and July, with fixtures also due to take place at Durham, Edgbaston, Bristol, and Cardiff.

It is possible that more games could be added amid uncertainty over whether the planned 2021 World Test Championship final will go ahead after several qualifying matches this year were canceled because of the Covid-19 outbreak.

Any additional fixtures could take place at Southampton's Ageas Bowl, not included in the provisional schedule despite its key role in 2020.

Vaccines not 'the solution' to ending Covid-19: WHO