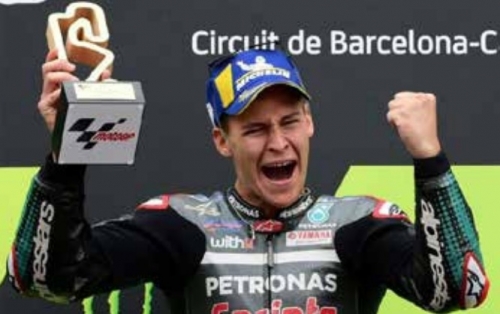 Fabio Quartararo produced a thrilling ride to claim a resounding victory at the Catalonia MotoGP yesterday, his third of the season which sends him top of the world championship standings. Joan Mir, on a Suzuki, came through to take second and is now eight points behind Quartararo in the standings, while Alex Rins completed the podium.

The race began in dramatic fashion with Andrea Dovizioso, who led the title race by a single point from Frenchman Quartararo, and Maverick Vinales, was taken out in the opening lap after tangling with Johann Zarcho. Quartararo, on a Yamaha, won the opening two races of the season but has struggled since then, failing to reach the podium in the last five races.

But the 21-year-old, who showed signs of a return to form in last week’s Emilia-Romagna MotoGP when he came fourth, was back to his best in Barcelona, although his bike almost blew the race. “The race was very hard for me,” said Quartararo. “My back tyre was completely wrecked and we knew how strong the Suzukis were.

“I am not completely 100 percent but I went step by step and I am very happy with this win. “I suffered in my head a lot in the last month, not getting on the podium, it wasn’t easy.” Starting from pole, alongside the fellow Yamahas of Franco Morbidelli and Valentino Rossi, he set a fierce pace which put the pressure on the field, especially those trying to close him down.