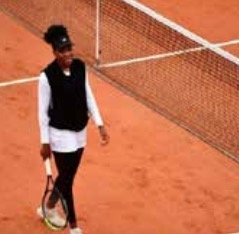 Venus Williams said she was “not looking forward yet” to 2021 after suffering a third successive first-round exit at the French Open yesterday with a loss in straight sets to Slovakia’s Anna Karolina Schmiedlova. The 40-year-old Williams, runner-up at Roland Garros to sister Serena in 2002, lost 6-4, 6-4 to an opponent who snapped a 12-match Grand Slam losing streak.

It marked Williams’ third first-round defeat in a row at a Slam after exiting the US Open and Australian Open at the same stage. “It’s been a very long year of quarantine. Now I’ll get to rest. So I’m looking forward to that,” said Williams, insisting she would not play again this season. “I’m going home from here. I’m done. If there is somewhere to play, I won’t be there.”

Williams dropped serve six times in cold, blustery conditions in Paris as Schmiedlova registered her first main-draw victory at a Slam since the 2015 US Open. Her reward is a second-round tie against two-time Australian Open winner Victoria Azarenka. Williams, a seven-time Grand Slam champion, has not been past the third round at a major since 2017.

She has lost eight of nine matches on tour this year. “I just stepped off the court. So even though it hasn’t been a ton of tournaments, it’s still been a very long year. So, yeah, I’m not looking forward yet,” she said. Williams in 2011 revealed she had been diagnosed with Sjogren’s syndrome, an auto-immune disease whose symptoms include joint pain and fatigue.