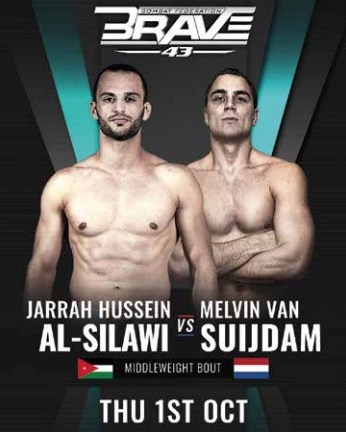 BRAVE Combat Federation Welterweight world champion Jarrah Al-Silawi made it a point to be in action at the Kombat Kingdom since signing a new contract with the fastest-growing MMA organization in the world.

Set on expanding his horizons, ‘’The Jordanian Lion’’ will test the waters at Middleweight when he takes on kickboxer Melvin van Suijdam in the main event of BRAVE CF 43, the third and last show on the Kombat Kingdom series, set for October 1st.

Widely regarded as the best-ever fighter from the Middle East, Al-Silawi wants to keep active while the likes of Abdoul Abdouraguimov, who expressed a desire to come down to Super Lightweight, Kevin Ruart and Louis Glisman fight it out for the right to become the next Welterweight contender.

With that in mind, he will jump up to Middleweight to face the Dutch kickboxer, who holds a professional MMA record of 11 wins and 5 losses and whose last win came by way of submission, showing his development as a mixed martial artist. It will be the perfect test for Al-Silawi, who might even have a score to settle with reigning Middleweight world champion Mohammad Fakhreddine.

Two iconic figures of the Middle East MMA scene, ‘’The Jordanian Lion’’ and ‘’The Latest” fought twice before, with Al-Silawi winning the first fight via submission and Fakhreddine taking the rematch by decision. BRAVE CF 43 goes down at the Bahrain National Stadium on October 1st and will also feature the return of the biggest prospect in MMA, as Muhammad Mokaev takes on Jamie Kelly in a Bantamweight match-up. Bernardo Sopai will return after an impressive debut win as he takes on Bahrain-based Brazilian jiu-jitsu specialist Gerson Pereira.