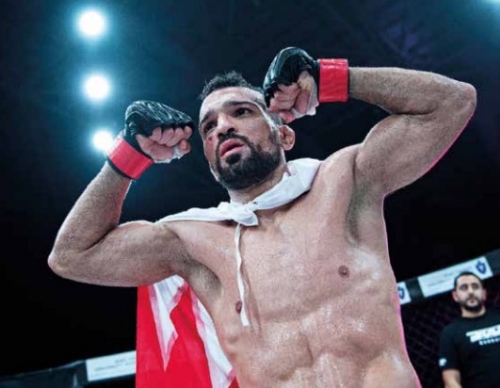 Bahrain’s own Hamza Kooheji was able to persevere through a tough fight against rising contender Aidan James and got the biggest victory of his career at home during BRAVE CF 42 and is now one of the front runners to be the next challenger to reigning Bantamweight champion Stephen Loman.

Kooheji and Loman have met each other on several occasions, and the two have even fought on BRAVE CF’s first-ever card, held four years ago. Both men were victorious that night, but Kooheji has chosen to develop himself further and work his the way between Featherweight and Bantamweight divisions, before settling for a pursuit of the Bantamweight title.

Loman is the longest-reigning world champion in his country’s history in MMA. He has been the BRAVE CF champ since November of 2017, and has defended his crown four times, after winning the title in Bahrain, at BRAVE CF 9. Since then he has fought and won in Northern Ireland, Bahrain (again), his home country of the Philippines, and India.

Stephen has been out of action since November of last year but may be enticed to come back soon for a big challenge against Kooheji. After beating Aidan James at BRAVE CF 42, Hamza went to social media to thank the several messages he received from his fans and said he was sorry he was not being able to keep up with all the shows of support from his countrymen and beyond.

James, for his part, gave a valiant effort and broke his hand during the bout which makes Kooheji’s victory more impressive. In a post-fight interview, Hamza spoke about wanting to fight Loman and urged BRAVE CF to make the fight happen.