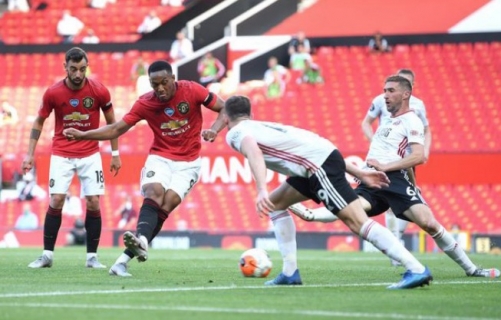 Manchester United closed to within two points of the top four thanks to Anthony Martial’s hattrick in a 3-0 win over Sheffield United yesterday. United are still far off challenging again for titles at the top of the table, but there are growing signs of momentum for Ole Gunnar Solskjaer’s men as they extended their unbeaten run to 13 games.

Martial produced two predatory first-time finishes before half-time to put the Red Devils in command. Sheffield United were riding high in March before football’s shutdown for three months, but the Blades have now picked up just one point and failed to score in their three games since the restart.

United could have pilled on much more pain after the break, but were content with one more goal as Martial completed his first career hat-trick with a cheeky chip from Marcus Rashford’s pass. Fifth-place could still be good enough for a place in next season’s Champions League depending on the outcome of Manchester City’s appeal against a two-season ban from European competition.

And Wolves remain level on points with United in fifth by continuing their perfect restart with a 1-0 win over Bournemouth. Just as in a 2-0 victory at West Ham on Saturday, Adama Traore and Raul Jimenez combined to break the deadlock as the Mexican powered home a header for his 24th goal of the season.

Defeat leaves Bournemouth still in the bottom three on goal difference and there are now three teams tied on 27 points as Aston Villa struck late to claim a 1-1 draw at Newcastle. Dean Smith’s side look set to rue a host of missed chances before half-time when Dwight Gayle put the Magpies in front. However, Ahmed El Mohamady’s scrappy finish from Conor Hourihane’s corner salvaged a precious point.

Any hope of Norwich hauling themselves out of trouble now looks forlorn as the Canaries fell to a second home defeat in a week. Michael Keane scored the only goal as Everton won 1-0 at Carrow Road to move above Arsenal into 10th. Norwich remain rock bottom, six points adrift of safety