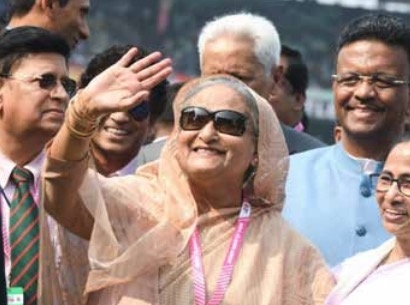 A 15-year-old boy has become the latest person to fall foul of Bangladesh’s contentious internet laws after being arrested for criticising Prime Minister Sheikh Hasina on social media. Rights groups say the laws are used to silence dissent, with hundreds of people charged since 2018 for crimes including smearing the image of Hasina and other senior political figures.

Police in Bhaluka said yesterday they arrested Mohammad Emon at the weekend after a local official from the ruling party claimed the teen had “badmouthed... our mother-like leader”. On Facebook, the teen had allegedly written that out of 100 taka ($1.20) paid in a new mobile phone tax, “35 to 25 taka has to be given to Sheikh Hasina as widow allowance because her husband is no more”.

Hasina’s husband died in 2009. Tofayel Ahammed, the local councillor who filed the case, said the teenager’s aggressive remark had agitated locals and that his parents supported the main opposition Bangladesh Nationalist Party.

Local police chief Main Uddin said Emon had later deleted the controversial Facebook post and wrote another one apologising. Still, the boy was sent to the reformation centre where he would spend time “realising his mistakes and correcting his character”, Uddin added.

Virus toll nears half a million as cases surge in US, L. America