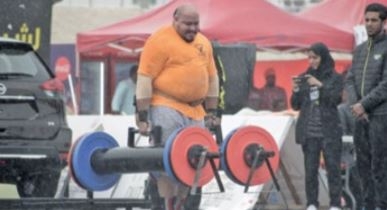 HH Shaikh Khalid bin Hamad Al Khalifa, First Deputy Chairman of the Supreme Council for Youth and Sports and President of Bahrain Olympic Committee has approved the official date of the 3rd Strongest Bahraini Man Championship which will take place on February 8, 2020.

To be held under the patronage of HH Shaikh Khalid bin Hamad Al Khalifa, the event will be organised by HH Media Office under the theme #be_a_beast at the area opposite to the Avenues Mall. The competition is part of HH Shaikh Khalid’s sport initiatives and will cover the light, middle and heavy weights. The contest will stand as the qualifying round for the #strongest_GCC_man which will be organised in April this year at Bahrain International Circuit.

“We have approved the organisation of the third edition of the event as part of our belief in the importance of supporting the Bahraini youth and sports in the Kingdom. We want to discover young and interesting talents as we look forward to forming international teams who are capable of fighting for top honours,” HH Shaikh Khalid said.