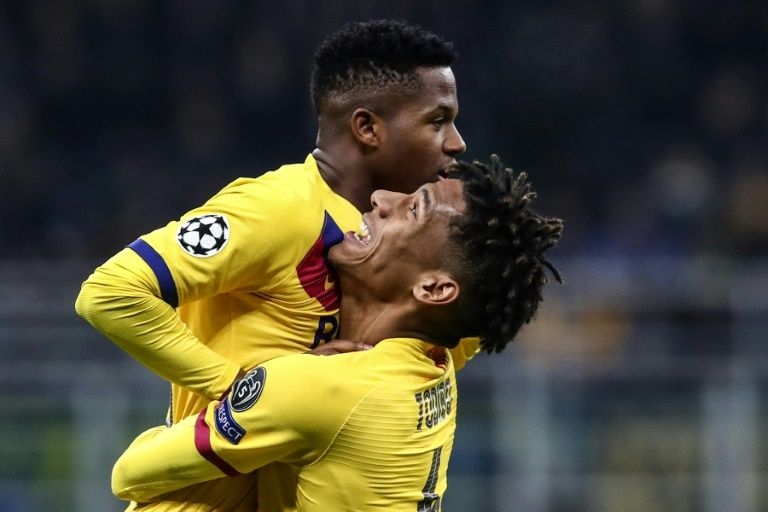 Teenage prodigy Ansu Fati became the youngest player to score a Champions League goal as a second-string Barcelona side beat Inter Milan 2-1 to send the Italians crashing out of the competition on Tuesday.
The 17-year-old Guinea-Bissau-born attacker picked up a Luis Suarez cross to fire home four minutes from time to become the youngest player to score in the Champions League.
Barcelona were already through to the knockout stages as Group F winners and they left six-time Ballon d'Or winner Lionel Messi at home.
But Serie A leaders Inter needed a win over the La Liga leaders or to match Borussia Dortmund's result at home to Slavia Prague to qualify on their superior head-to-head record.
Instead the Germans made it through to the knockout rounds with a 2-1 win to finish three points ahead of third-placed Inter, who go into the Europa League.
"Seeing replays of Fati's goal hurt," said Inter coach Antonio Conte.
"It's a goal that cut our legs from under us and killed us from all points of view.
"We lacked that pinch of cynicism and precision to finish off. I have little to reproach my players, they have given everything."
Debutant Carles Perez had put the Spaniards ahead after 23 minutes at the San Siro, but Romelu Lukaku drilled in a equaliser just before the break to keep the hosts in the tie.
Inter's forward pair of Lukaku and Lautaro Martinez had three goals ruled offside between them, two for the Argentine who has already scored five times in the competition this year.