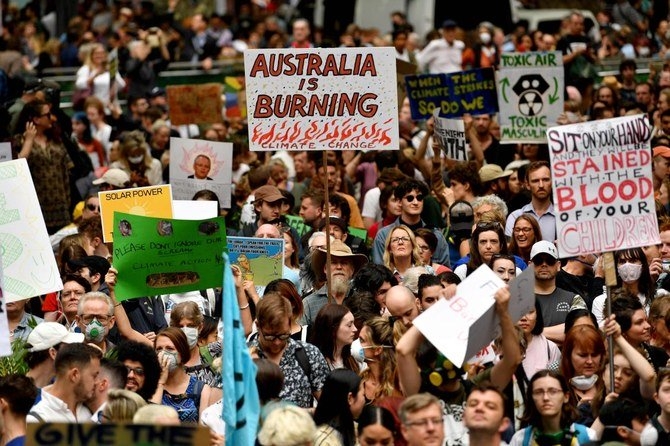 Up to 20,000 protesters rallied in Sydney on Wednesday demanding urgent climate action from Australia’s government, as bushfire smoke choking the city caused health problems to spike.

Sydney has endured weeks bathed in toxic smoke as hundreds of blazes have raged across the countryside, with hospitals recording a 25 percent increase in the number of people visiting emergency departments last week.

On Tuesday smoke alarms rang out across Australia’s biggest city, with thick haze triggering smoke alarms and forcing buildings to be evacuated, school children to be kept indoors, and ferries to be canceled.

The devastating fires have focused attention on climate change, with scientists saying the blazes have come earlier and with more intensity than usual due to global warming and a prolonged drought.

Many of the protesters voiced anger at the government’s silence in the face of the crisis.

“The country is on fire” said 26-year-old Samuel Wilkie attending his first climate protest. He described politicians’ response as “pathetic.”

“Our government is not doing anything about it,” said 29-year-old landscape gardener Zara Zoe. “No one is listening, no one is doing anything.”
Prime Minister Scott Morrison — a staunch backer of Australia’s vast coal industry — has said little about the smoke since the crisis began, preferring to focus on fire-hit rural communities.

Organizer Chloe Rafferty said that had created anger at the conservative government’s inaction.

“People are experiencing it in their day-to-day lives.”

As well as a rise in people visiting hospitals with smoke-related health symptoms, the number of emergency calls for ambulances spiked 30 percent last week.

“However, people with conditions like asthma, emphysema and angina are at greater risk because the smoke can trigger their symptoms.”

Big sale and 'snow' in Dubai this festive weekend