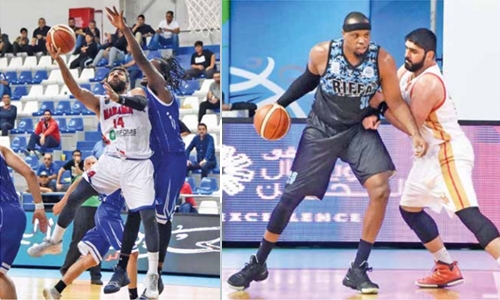 Riffa and Manama last night set up a mouth-watering clash for the title in the Bahrain Basketball Association (BBA) Cup. American professional Joseph Jones buried the go-ahead three-pointer to help lift Riffa to a thrilling 78-76 victory over Muharraq and book their seat in the tournament final. Manama, meanwhile, outclassed Nuwaidrat 107-82 to also advance to the championship game. The final is scheduled to be played on Tuesday next week.

It will tip off at 7pm at Zain Basketball Arena in Um Al Hassam. In Riffa’s victory, Muharraq put on a gutsy comeback in the fourth quarter after going down 61-70 with just over eight minutes remaining. They managed to tie the proceedings at 75-apiece with a lay-up by Mohammed Juma’a, but then a triple by Jones off a pick-and-roll with Hassan Helal gave Riffa the lead for good at 78-75 with less than two minutes remaining.

Juma’a would make one more free-throw from there but neither team made another basket the rest of the way. Jones’s three-pointer was his lone make from beyond the arc in the game. He finished with 22 points and 12 rebounds to pace Riffa. Ali Jassim added 19 including four three-pointers, while Abdulrahman Ghali had 15 and Helal 14 to go with six assists. Muharraq’s US import Kevin Murphy had 29 to lead his team in the loss.

Juma’a chipped in with 14 off the bench while Sayed Kadhem Majed added 11. It was a tightly contested game throughout, with Riffa’s ninepoint lead in the final canto being their biggest of the night. In Manama’s big win, they took a commanding lead early on and never looked back.

The season to sparkle at Four Seasons Hotel Bahrain Bay