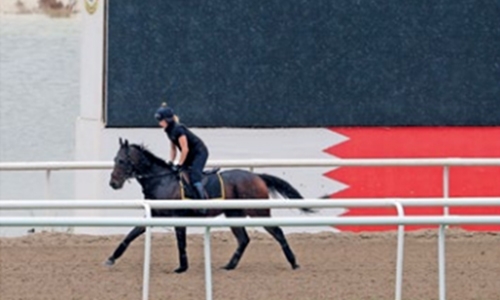 The 14 thoroughbreds were chosen from 46 global entries to compete in the race over 2,000 metres (10 furlongs) of turf. All are rated at or above 95 by their domestic authority, with six rated 106 and over. Intellogent, ridden by twotime champion jockey PierreCharles Boudot, will be the first Group 1 winner to run in Bahrain and boasts an accumulated £401,647 in career earnings. Mountain Angel has won twice this year in England but is perhaps best known for placing second at one of the recent Middle Eastern races.

Turgenev nearly completed what would have been a famous five-timer for jockey Frankie Dettori at Royal Ascot earlier this year, before being caught close home in the Britannia Stakes, but has since twice finished runner up to two subsequent Group winners. Royal Julius has been a model of consistency, having failed to finish outside the first five places in his last eight starts, with £469,000 in accumulated career earnings. Pivoine will be ridden by three-time champion jockey Silvestre De Sousa, in what will be his third international trip of the year, following outings in the US and Canada.

Afaak, owned by His Highness Sheikh Hamdan bin Rashid Al Maktoum, Deputy Ruler of Dubai, is coming off a win at this year’s Royal Hunt Cup at Royal Ascot. One of the most captivating events leading up to the race is the live Post Position Draw (PPD) for the announcement of the fields, which will be held today. The occasion will be broadcast exclusively on Racing TV for international audiences, and on BTV for local audiences.

The PPD officially begins the week of festivities surrounding the inaugural Bahrain International Trophy. It will take place at 12noon at Four Seasons Hotel Bahrain Bay. The PPD involves a random selection process to determine which position each horse will take in the starting gates. Each trainer, or another representative, will take the stage and select a Gulf Air memento, under which the post positions will be revealed. Although it is preferable to draw low rather than high, the 2,000-metre distance of the outing means it will be anyone’s race, due to the significant run to the first bend.

The PPD will be the first time that all the connections come together, and meet with officials from the racetrack. Seven of the nine European trainers will be in attendance, ready to show off their horses and discuss their chances with the media. Famous TV racing presenter Nick Luck will be presenting the draw and noted horse racing announcer Mark Johnson will also be in attendance. International Racing Bureau (IRB) Director Adrian Beaumont commented: “Everyone is very excited to participate in the first-ever running of the Bahrain International Trophy.

The PPD is a great way to start the week and preview the meeting. Everyone is looking forward to spending time in Bahrain during the week ahead – and we can’t wait for Friday.” Another glittering highlight of the draw’s activities will be the grand unveiling of the magnificent sterling silver and mahogany trophy that has been commissioned from the illustrious House of Garrard. The Bahrain International Trophy is the kingdom’s first-ever international horse race.

It is being spearheaded by REHC Executive Director Shaikh Salman bin Rashed Al Khalifa and supported by local partners Gulf Air, Bapco and Batelco. This Friday, preliminary races will start from 1.55 pm and the main race is at 4.30 pm. The event is open to the public, free of cost, with entertainment for the entire family, including children’s activities, as well as food and drinks.