Bahrain to go all out | THE DAILY TRIBUNE | KINGDOM OF BAHRAIN 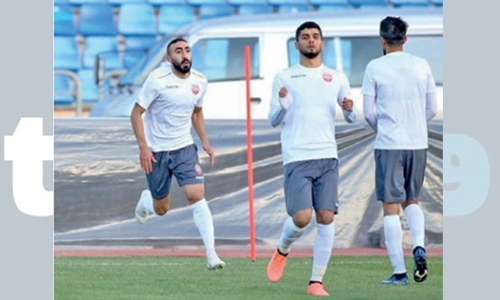 National team head coach Helio Sousa says that Bahrain will be going all out to claim a victory against Iraq today in their joint-qualifier for the Fifa World Cup 2022 and the AFC Asian Cup 2023. The Bahrainis will be hoping to come away with the full three points, which would propel them to the top of qualification Group C. The match is set to be played at Amman International Stadium and it is scheduled for a 5 pm kick-off, Bahrain time.

Speaking in his official prematch Press conference yesterday, Sousa said that he is expecting a tough challenge against the Iraqis, who he described as a very strong team that will be posing a great test for Bahrain. The Portuguese coach added, however, that his squad is prepared to take the challenge head-on, and that they will be doing their very best to defeat their opponents. It will be the national team’s fifth match of qualifying. Iraq are currently in solo first place in the Group C standings where they have 10 points from their four games, two points ahead of Bahrain.

Iran are third with six points, followed by Hong Kong with two and Cambodia with one point. Sousa noted that Bahrain are hoping to bounce back from the negative result they had in Hong Kong on Thursday last week when they dropped two points in a goalless stalemate in a game that they could have won. Iraq had also clinched a 2-1 victory over Iran that same evening, which helped them move to the top of the group table. Sousa said that Bahrain have played two games against Iraq over the past few months and both teams know each other’s styles and areas of strength.

Bahrain drew 1-1 in their first qualifying meeting at home in early September – a match that came after the Bahrainis defeated an understrength Iraq side in August for the title in the West Asian Football Federation Championship. He noted that the Iraqis will have a boost from the huge support he expects from their fans in Amman. Meanwhile, defender Sayed Mahdi Baqer said that the Bahrainis came to Amman focused only on winning. Midfielder Komail Alaswad was quoted as saying: “We should forget the match against Hong Kong and concentrate on the match against Iraq.

We know, though, that it will be a difficult test because Iraq are going into the match on the back of an important victory against Iran.” On the opposing end, Iraq’s Slovenian head coach Srecko Katanec said that his team must n o t b e compla - cent against Bahrain after defeating their Iranian rivals in their last game. “We are only midway through qualifying and we should have an overall look at the group and not stop competing because we defeated Iran,” he said.

“We must concentrate on the next matches as we still have four matches to play and things could change.” The Bahrainis had a pair of training sessions at the match venue yesterday as part of their final preparations for today’s clash. The match commissioner’s meeting also took place and it was attended by a team headed by Bahrain Football Association technical department head Abed Al Ansari.