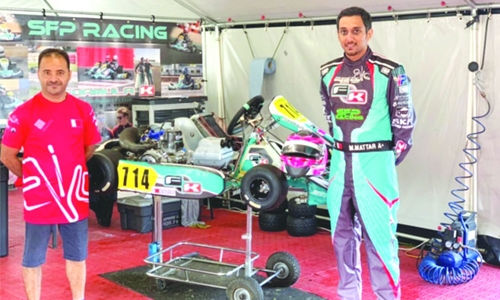 Champion Bahraini karter Mohammed Mattar is set to fly the kingdom’s flag in international competition over the next couple of weeks in Europe. Mattar will be battling in the IAME International Final 2019 in Le Mans, France, over the next few days and then also race in the Rotax Max Challenge Grand Finals 2019 in Sarno, Italy from October 19 to 26.

Mattar is already in Le Mans and over the past few days has been taking part in free practice and qualifying sessions, where he is racing in the X30 Super Shifter category. Today, he will take part in the Heats, which continue tomorrow and Friday. The Pre-Finals and Finals will then be held on Friday and Saturday.

There are several other competition categories in the IAME meeting, including the X30 Senior, X30 Junior, X30 Master, X30 Pro and X30 Mini, and the MINIME FFSA/Cadet MUK. The IAME International Final is in its eighth edition. The event is bringing together over 500 of the top karters from around the world.

Meanwhile, Mattar will be competing in the Senior Max category in the Rotax Max Challenge Grand Finals in Sarno. He is one of more than 70 entries in the class, which is also set to feature drivers coming from all across the globe. The event also features racing in the DD2, DD2 Masters, Junior, Micro, Mini and E-Kart THUNDeR classes.