Djokovic toppled in Cincy | THE DAILY TRIBUNE | KINGDOM OF BAHRAIN 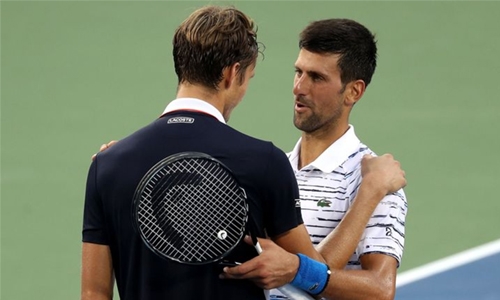 A fuming Djokovic, who looked to have control of the contest in the early going, was caught out when Medvedev stepped things up in the second set. “I don’t know how I turned it around, I was so tired after the first set and I thought I might not be able to keep up the intensity,” said Medvedev, who has competed in 15 hardcourt matches since July 30.

“But I had a momentum chance in the second set and the crowd gave me energy,” added the Russian, who will be playing his second Masters series final in eight days, after falling to Rafael Nadal in Montreal last Sunday. “Novak had been destroying me on second serve, so I just went for it,” Medvedev said. “It’s a great feeling to win and beat the number one.”

Djokovic, the defending champion who was playing his first tournament since his Wimbledon triumph in July, need some time to cool down before pondering his loss. “He deserves to be in the mix, certainly, with all his results,” Djokovic said. “He’s working his way to top 5. “He’s definitely one of the best players in the world at this moment.” Djokovic said there was little he could do in the face of Medvedev’s go-for-broke style.

“When I had my racquet on the ball I was returning also his serves, but you can’t really predict someone or prepare yourself for someone serving that big second serve consistently from 4-3 to the end of the match with making maybe two double faults out of God knows how many serves,” he said. With the US Open starting on August 26, Djokovic said he took “mostly positives” from the week. “Today I did lose a tennis match, but I didn’t do too much wrong,” he said.

“So I’ll take that and I’ll move forward to New York and have a good practice week. “I’m going to go to fight for a title as everyone else does -- and I like my chances.” Medvedev won 12 of the last 14 points in the second set to square the match against Djokovic, then ran up a 3-1 lead in the third on the way to victory on his first match point.