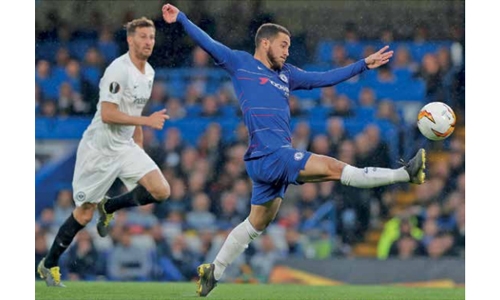 Maurizio Sarri admitt e d Chelsea rode their luck to reach the Europa League final as Kepa Arrizabalaga’s penalty heroics clinched a dramatic 4-3 shootout win against Eintracht Frankfurt on Thursday. Sarri’s side will face London rivals Arsenal in an all-Premier League final in Baku on May 29 as for the first time all four finalists in the Champions and Europa League come from England.

Chelsea took the lead in the semi-final second leg thanks to Ruben Loftus-Cheek’s first half strike at Stamford Bridge. But Luka Jovic equalised soon after the interval as a tense clash finished 1-1 after extra time and 2-2 on aggregate. Cesar Azpilicueta’s penalty was saved by Kevin Trapp in the shoot-out, but Kepa kept out Martin Hinteregger’s effort and then turned away Goncalo Paciencia before Eden Hazard slotted home the decisive kick to spark wild celebrations.

It was a sweet moment of redemption for Kepa after he was widely criticised for his astonishing mutiny in the League Cup final against Manchester City when he refused to be substituted before the Blues lost on penalties. A relieved Sarri conceded Chelsea found it hard to control the game and needed some good fortune to avoid a shock exit. “We played a very good first half. Then in the first part of the second half, we went in trouble. We were passive in the defensive phase, so we conceded the goal, 10 minutes of panic,” he said.

“In extra-time we were really tired. After 60 matches to play 120 minutes it’s really very difficult. “There is no preparation for penalties because you can kick very well in the training ground but then the pressure is different. “We have to recover energy because we are really very tired.” Hazard also relished his crucial contribution in what could be his last kick at the Bridge amid rumours of a close-season move to Real Madrid. “I am only thinking to win something for this club,” said Hazard when asked if the final will be his last game for the club.

“If it is my last game I will try to do everything. In my mind I don’t know yet.” Having already qualified for next season’s Champions League when they guaranteed a top-four finish in the Premier League last weekend, Chelsea can bring an uplifting end to Sarri’s troubled first season by winning the Europa League. Former Napoli boss Sarri this week claimed Chelsea “deserve” to win a trophy this season and the Italian is now one victory away from the first major prize of his managerial career.