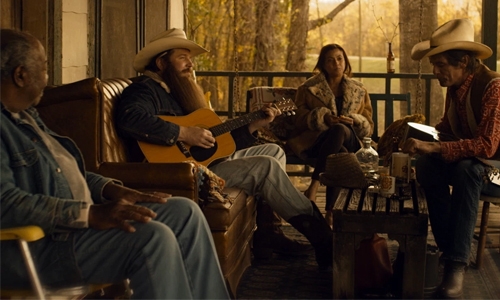 The music biopic “Blaze” inspires more interest in little-known musician and first-time actor Ben Dickey than in Blaze Foley, the late — and also little-known — musician Dickey plays. Ethan Hawke, directing his third feature, has packed “Blaze” with lovely everyday moments while giving it virtually no arc. Highly dramatic events occurred in Foley’s short life (he died in 1989 at age 39), yet “Blaze” is sorely lacking in crescendos, musical or narrative.

The “A Star Is Born” trailer has more of them than this whole film does. But Hawke showed an exquisite eye for talent in casting Dickey, who Hawke met through his wife. Dickey is a large man who walks with a pronounced limp in “Blaze” --— a nod to Foley’s childhood bout with polio. So Dickey would have made a strong impression regardless. But it turns out he can act, and sing, and has a genuine magnetism that combines with an endearing quality to create a highly appealing screen presence. “Blaze” contains songs written by Foley, who was well-known in Texas but not elsewhere.

These songs are not very memorable beyond Dickey’s performance of them, his voice warm, a touch gritty and especially moving as it stretches close to breaking on higher notes. Dickey’s speaking voice similarly captivates, especially during intimate conversations between Blaze and his actress girlfriend, Sybil Rosen (Alia Shawkat). There is a believable, lived-in chemistry to this pairing, with Shawkat’s spiky intelligence offering a counterpoint to Dickey’s shade-tree-philosopher manner. Rosen wrote a memoir about her time with Foley, and gets a screenwriting credit here, along with Hawke.

Musician Charlie Sexton brings charisma and a haunted quality to Townes Van Zandt, the legendary Texas musician who was a Foley pal, drinking buddy and fellow teller of tall tales. No country music biopic would be complete without drinkin’ scenes, but Hawke spends too little time with Blaze at bottle’s bottom, even though alcohol is supposed to be the source of most of his problems. More lows might have compensated for the lack of highs in a movie about a musician who never made it big. They also would have given skilled newcomer Dickey even more to play.