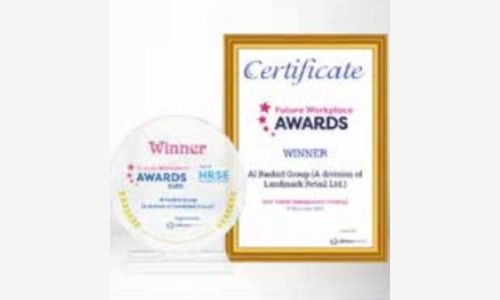 Al Rashid Group, a division of Landmark Group, has won award for the “Best Talent Management Strategy” at the inaugural Future Workplace Awards 2022 for its impactful work on people management.

Al Rashid Group was among only two Middle Eastern organisations, to take home an award this year, competing alongside several international conglomerates.

“The award is a testament to Al Rashid Group’s dedication of enabling its people to reach their full potential,” said Sandeep Narain, Territory Head of The Al Rashid Group.

“We believe that empowered and engaged employees will enable our Group to fulfill its missions and deliver excellence to our customers through our efficient operations.”

Commenting on the win, Priya Ranjan, Chief Human Resources Officer of Landmark Retail, added: “While developing the Retail Talent Strategy, our aim was to create a comprehensive plan with a systemic approach to maximising the potential of our human capital through coaching, mentoring, and structured on-the-job learning initiatives.”