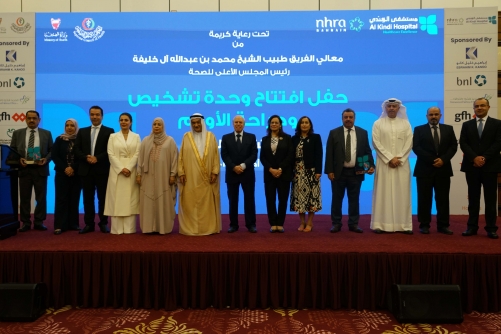 Kindi Hospital, one of the leading healthcare players in Bahrain, opened a state-of-the-art cancer diagnostic and surgery centre on Monday.

Speaking to The Daily Tribune, Dr Shaikh Mohammed said, “It’s a pleasure to work with the private sector to increase competition and provide the general public with services of the highest calibre. Patients can now select the finest providers.”

According to Dr Ebtisam Al Dallah, the CEO of Al Kindi Hospital, the hospital’s capacity has grown by 80 per cent as a result of the expansion. “Future development and new centers for additional parts are also planned.”

“We have opened the diagnostic and surgery unit and it’s the first of its kind in Bahrain, we really invested in the senior consultants who are well known and we also invested in high tech technology and from the initial examination to the diagnosis it takes only one day to do all the tests and get the results.”

The Cancer Diagnostic and Surgery Center was founded to provide patients with services with accuracy and promptness, the CEO said. Al Kindi Hospital is one of the leading private hospitals in Bahrain, established in the year 2008 and located in the New Zinj area.

Health authorities have been highlighting the importance of Breast Cancer Awareness in October as it’s the month to increase awareness of the disease and to raise funds for research into its cause. Many Health Ministry’s programmes, with the directives and support of the government, have always worked on spreading awareness on all types of cancers and possible prevention methods.