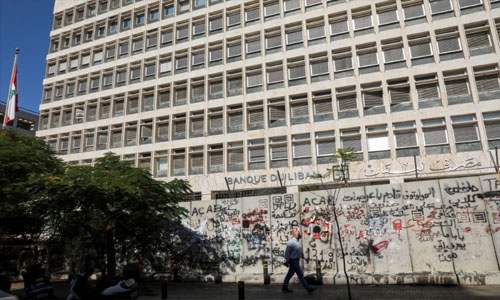 Lebanon’s central bank yesterday said depositors with accounts active as of October 2019 would be able to withdraw up to $400 a month plus the equivalent amount in local currency, marking a significant concession after a chaotic two days in Lebanese banking.

Under a central bank circular issued last year, depositors were permitted to withdraw funds from their dollar accounts, paid in the local currency, but only at a rate of 3,900 pounds to the greenback.

That rate is only about a third of the value of dollars on the black market - which on Friday traded at upwards of 13,000 pounds to the dollar - but it has been the only way many Lebanese have been able to access their funds. When the circular was issued last year Lebanon’s black market rate was around half of what it is now.

Lebanese account holders who withdraw at the 3,900 pounds rate are now taking a loss of about 70% on their funds and there have been calls for the central bank to raise the rate.

Friday’s decision to grant depositors up to $800, with the exchange rate calculated at close to market value, follows a chaotic two days in the financial sector.

Details of the decision, which will take effect from July 1, will be issued later and will apply to the value of accounts as they stood at the end of March 2021, the bank said in a statement.

On Wednesday night the central bank had issued a statement saying it would stop allowing withdrawals at the fixed rate of 3,900 without elaborating.

It quickly back-pedalled on Thursday after protests erupted and the governor of the central bank reassured depositors that it was not bankrupt and people’s deposits were safe and would be returned.