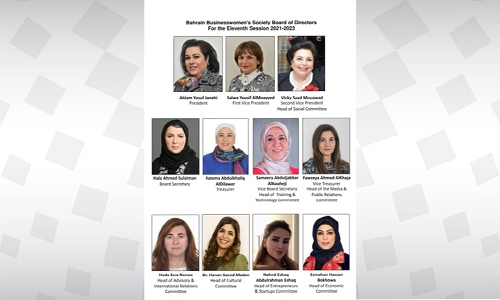 Ahlam Yousuf Janahi was named the president of the newly elected Bahraini Businesswomen Society board of directors, which now has seven new members.

A General Assembly held at the premises of BBS in Mahooz elected the new board members.

The society held its elections on February 8th and 9th.

BBS statement said, “The General Assembly was held, in a friendly atmosphere with positive and active participation.” Votes cast in the elections reached 69, and the number of valid votes reached 68.

However, Ambassador Huda Ezra Nonoo stepped down and settled for a first reserve member on the BBS Board. Later, Shaikha Fajer Al Khalifa resigned, and after the acceptance of her resignation by board members, Nonoo came on board as the 11th board member.

The new board of directors now represents 70% of the elected board. They held their first meeting headed by the oldest member according to the law.

The elections are held under the supervision of the concerned authorities represented by the Ministry of Labour and Social Affairs.

BDB appoints Farah Rabea as the Head of Digital Marketing

Go online for passport and visa services in Bahrain: NPRA