WhatsApp starts payment service in India. Here's how to setup, send and receive money | THE DAILY TRIBUNE | KINGDOM OF BAHRAIN 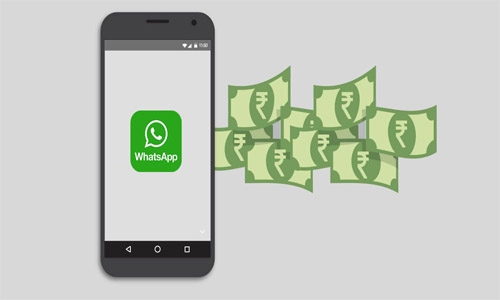 WhatsApp on Friday said it is rolling out its payments services in India after receiving nod from the National Payments Corporation of India (NPCI).

In 2018, the Facebook-owned company had started testing its UPI-based payments service in India, which allows users to utilise the messaging platform to send and receive money. The testing was limited to about a million users as it waited for regulatory approvals to come in.

On Thursday, NPCI - which runs the Unified Payments Interface (UPI) used for real-time payments between peers or at merchants' end while making purchases - allowed WhatsApp to start its payments service in the country in a "graded" manner, starting with a maximum registered user base of 20 million in UPI.

"Starting today, people across India will be able to send money through WhatsApp. This secure payments experience makes transferring money just as easy as sending a message. People can safely send money to a family member or share the cost of goods from a distance without having to exchange cash in person or going to a local bank," WhatsApp said in a blogpost.

It added that the payments feature has been designed in partnership with NPCI using UPI, an India-first, real-time payment system that enables transactions with over 160 supported banks.

In June this year, WhatsApp had launched 'WhatsApp Pay' in Brazil - making it the first country where the service was widely rolled out.

In India, WhatsApp - which counts India as its biggest market with over 400 million users - will compete with players like Paytm, Google Pay, Walmart-owned PhonePe and Amazon Pay.

"Payments (service) on WhatsApp is now available for people on the latest version of the iPhone and Android app... We're excited to join India's campaign to increase the ease and use of digital payments, which is helping expand financial inclusion in India," it said adding that users will need to have a bank account and debit card in India to send money through the platform in India.

WhatsApp said it is working with five banks in India - ICICI Bank, HDFC Bank, Axis Bank, the State Bank of India, and Jio Payments Bank - and people can send money on WhatsApp to anyone using a UPI supported app.

"In the long run, we believe the combination of WhatsApp and UPI's unique architecture can help local organisations address some of the key challenges of our time, including increasing rural participation in the digital economy and delivering financial services to those who have never had access before," it added.

WhatsApp noted that its payments service is designed with a strong set of security and privacy principles, including entering a personal UPI PIN for each payment.

"There is no fee... because its WhatsApp, you know its secure and private too. With UPI, India has created something truly special and is opening up a world of opportunities for micro and small businesses that's the backbone of the Indian economy," Facebook CEO Mark Zuckerberg said in a video message.

He added that the payments service will be available in 10 Indian language versions of WhatsApp.

Interestingly, the approval for WhatsApp came on the same day as NPCI limited a single third party like WhatsApp or its rivals like Google Pay or Walmart's PhonePe to handle only 30 per cent of overall UPI transaction volumes by putting a cap. This is expected to allay fears of potential monopolisation.

Recently, PhonePe had announced crossing the 250 million registered user milestone and over 100 million monthly active users (MAU), and had 835 million UPI transactions in October with a market leading share of over 40 per cent.

Google had 67 million monthly active users in September last year, and on the merchant side, it had over three million active merchant's data for June 2020. Google Pay has not shared any updated stats since September 2019.

UPI processed over 2.07 billion transactions in October (worth Rs 3.86 lakh crore), up from over 1.8 billion in the previous month, as per data from NPCI.

Step 1: Open the WhatsApp app on your phone and tap on the three-dotted icon, which is placed on the top right corner of the screen.

Step 2: Tap on Payments > Add payment method. You will get a list of bank names.

Step 3: After selecting the name of the bank, your number (linked with the bank) will be verified. For this, you need to tap on Verify via SMS. Make sure the WhatsApp number is the same as the one linked to your bank account.

Step 4: Once the verification process is completed, you can then need to finish setting up payments. You will need to set a UPI pin for carrying out transactions similar to how it is on other apps. After this, you will be able to see the chosen bank on the payments page.

How to send or receive money

Step 1: Open the chat of the person on WhatsApp and go to attachment icon.

Step 2: Tap on Payment and add the amount you want to send to the individual. One can also add a note.

Step 3: To complete the WhatsApp payment process, you need to enter your UPI PIN. once the transaction is completed, you will get a confirmation message.