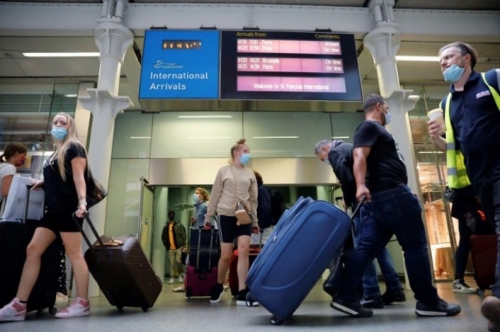 European stocks slumped yesterday at the end of a largely positive week for global equities dragged down by fears of a second wave in coronavirus cases and the stalemate in Washington over a new stimulus package for the US economy.

London’s benchmark FTSE 100 index finished the day down 1.6 per cent after the UK government reimposed a quarantine for travellers from France and the Netherlands, prompting Paris to promise a “reciprocal measure”. The Paris CAC 40 index also retreated 1.6 pc and Frankfurt’s DAX 30 shed 0.7 pc. On Wall Street, the Dow was up marginally in late morning trading.

Both the S&P 500 and Nasdaq Composite spent most of the morning in negative territory, but remained within striking distance of record highs, however. Asian markets ended mixed. In addition to Britain’s quarantine, Germany put all of Spain except on its quarantine list except for the Canary Islands.

Spain, for its part, closed night clubs, and banned smoking and drinking in the streets to try to stem a rise in infections. “If European governments were hoping to salvage something tangible from the 2020 summer holiday season these recent setbacks are unlikely to help,” said Michael Hewson, chief market analyst at CMC Markets UK.

Shares in British Airways parent IAG tumbled 4.8 pc. The updated quarantine “is sadly yet another blow for British holidaymakers and cannot fail to have an impact on an already troubled aviation industry”, IAG said in a statement.

The UK government said the change would kick in Saturday at 0300 GMT, sparking an exodus among the estimated 160,000 British holidaymakers in France after a rise in coronavirus cases there. US stimulus Equities were also retreating Friday over fading hopes of a US stimulus deal being struck -- and ahead of key weekend trade talks between the United States and China.

Hopes that Democrats and Republicans would cast aside their mutual animosity to stump up much-needed cash for struggling Americans have been key to supporting equities for weeks. But they were dealt a blow Thursday when senators broke up for a summer recess, saying they would not return until early next month, while both sides continued to trade accusations over who was to blame for the impasse.

Democrats have called on Republicans and the White House to double their $1-trillion offer, having reduced their own proposal to $2 trillion from an initial $3.5 trillion. The expectation remains that an agreement will at some point be found, particularly with the US election nearing and millions of Americans in financial crisis.

In a sign of the battle governments could have in rebooting their economies, data out of China Friday showed consumers were still reluctant to go out spending, with retail sales falling last month despite forecasts of a small increase.

While the drop was shallower than in June, Innes said it showed that it was “going to take more than stimulus and deep discounts on luxury products to get people shopping again”. At the same time, industrial production continued to grow, suggesting the economy’s recovery is being supported by the manufacturing sector.

A 1.2 pc increase in US retail sales in July compared to June, more modest than economists had been expecting, also dented sentiment about the strength of the economic recovery there. Investors will be keeping a close eye on talks at the weekend between China and the US that will review the trade pact signed in January, though expectations are for the deal to be kept in place despite increasing tensions between Washington and Beijing.

Man who beats HIV once, dies of cancer