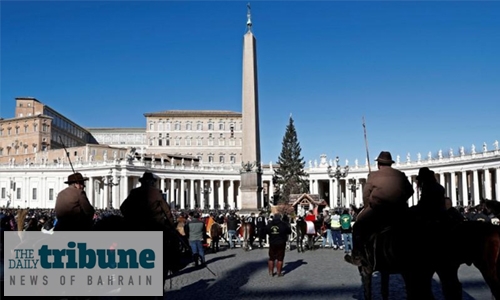 The Vatican has been fully re-admitted to the Egmont Group of world financial intelligence units after a suspension two months ago sparked by an investigation into the purchase of luxury London real estate. Carmelo Barbagallo, president of the Vatican’s Financial Information Authority (AIF), said on Thursday the AIF would “resume its collaboration with foreign financial intelligence units in full transparency and in the spirit of active cooperation”.

The Egmont Group’s president, Mariano Federici, had notified the AIF that it had been re-admitted to the use of Egmont’s secure communications network, Barbagallo said in a statement. Egmont is a Toronto-based informal organisation with about 165 members. Its secure network allows members to share information about crimes such as money laundering, tax fraud and terrorism financing.

Egmont’s acceptance of the Vatican six years ago was seen as a major step forward in cleaning up the Vatican’s negative imagefollowing years of scandals, particularly involving its bank. The suspension on Nov. 13 was a major setback for the Vatican, which risked again being seen as a pariah by the international financial community.

On Oct. 1, Vatican police entered the offices of the AIF and of the Secretariat of State - the administrative heart of the Catholic Church - as part of their investigation of an investment the Secretariat had made in London real estate. The officers, operating under a search warrant secured by the Vatican’s own prosecutor, seized documents, computers and cellphones during the raids.

The raid prompted concerns in the international financial community about the AIF’s ability to keep confidential documents secure and led to the suspension from Egmont. The suspension was lifted after the signing of a memorandum of understanding with Vatican prosecutors, the AIF statement said.

Barbagallo, 63, a respected senior Bank of Italy official, was appointed by Pope Francis in November to succeed Swiss lawyer and anti-money laundering expert Rene Bruelhart. Bruelhart had headed the AIF for five years and the pope decided not to renew his mandate.

Five Vatican employees were suspended after the Oct. 1 raids, including AIF director Tommaso di Ruzza. Domenico Giani, Vatican security chief and the pope’s bodyguard, resigned later over the leak of a document related to the investigation.