Aramco valuation set at up to $1.7 trn | THE DAILY TRIBUNE | KINGDOM OF BAHRAIN 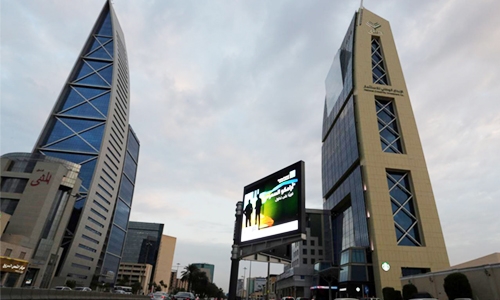 Aramco valuation set at up to $1.7 trn

Saudi Aramco has set a price range for its listing that implies the oil giant is worth between $1.6 trillion to $1.7 trillion, making it potentially the world’s biggest IPO. Aramco said yesterday it plans to sell 1.5 per cent of its shares or about 3 billion shares, at an indicative price range of 30 riyals ($8.00) to 32 riyals - valuing the IPO at as much as 96 billion riyals (£20 billion) at the top end of the range.

If priced at the top, the deal could just beat the record-breaking $25 billion raised by Chinese e-commerce giant Alibaba in its stock market debut in New York in 2014. Aramco’s float is the centrepiece of Crown Prince Mohammed bin Salman’s plan to diversify the world’s top crude exporter away from oil. Aramco does not plan to market its domestic IPO abroad, three people familiar with the matter said, which suggests international roadshows will not take place. “This will put the burden of the deal on local and regional banks,” one of the three people said.

“This means most of the investors will participate as Qualified Foreign Investors in a Saudi transaction,” another one of the people said. Aramco finally kicked off its IPO on Nov. 3 after a series of false starts. Prince Mohammed, who had floated the idea of the listing four years ago, is seeking to raise billions of dollars through the deal to invest in non-oil industries and create employment.

But the investment world is still trying to decide what the famously secretive company is worth. On one hand, Aramco is the world’s most profitable company with a planned dividend of $75 billion next year, more than five times larger than Apple’s payout, which is already the biggest of any S&P 500 company.

On the other, it is a bet on the price of oil at a time when global demand is expected to slow from 2025 as measures to cut greenhouse gas emissions are rolled out and the use of electric vehicles increases. The share sale is expected to be a huge hit among Saudi citizens who are being offered 0.5pc of the company. Retail investors have until Nov. 28 to sign up for the IPO while institutional investors can subscribe until Dec. 4, with company management going on marketing roadshows this week.

The Aramco listing means a year-end rush for equity markets with Alibaba currently taking orders for a Hong Kong listing that is expected to raise up to $13.4 billion for the online retailer. The Riyadh listing comes after initial hopes for a 5pc IPO on the domestic and international bourses were dashed last year amid debate over valuation and where to list Aramco overseas.

Aramco said the IPO timetable was delayed because it began a process to acquire a 70pc stake in petrochemicals maker Saudi Basic Industries Corp.