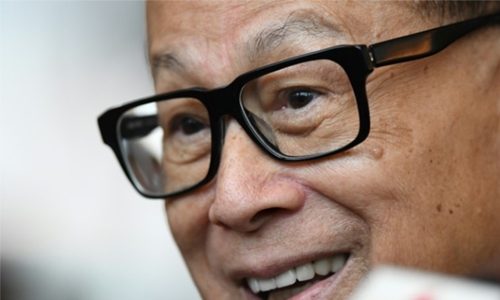 The 91-year-old billionaire said small and medium-sized businesses would benefit from the fund, worth HK$1 billion (US$128 million), which will be distributed in partnership with the government. It comes as Hong Kong’s economy faces “unprecedented challenges”, Li’s foundation said in a statement. This summer ’s protests, sparked by rising public anger towards Beijing ’s rule, has battered the economy which was already struggling with the US-China trade war fallout.

Figures released this month showed retail sales declined by a record 23 percent year on year in August, compounding an 11.5 percent slump the month before. Li was criticised by China’s Central Political and Legal Affairs Commission last month “for harbouring criminality” after he published a series of prominent adverts advocating for peace. Comments from him at the time also appeared to suggest he felt the mainly young protesters had some legitimate grievances. Li’s remarks contrasted starkly with many fellow tycoons who had published full-throated support for the city’s embattled pro-Beijing leaders.

But he later said his remarks had been misinterpreted, and condemned any actions that would violate the city’s rule of law. The billionaire is among the hugely influential coterie of Hong Kong’s twentieth-century oligarchs. He invested heavily in China in the 1990s, initially courting Beijing’s Communist leaders but later enduring thorny periods after his moves to offload major mainland property investments irking Chinese critics.