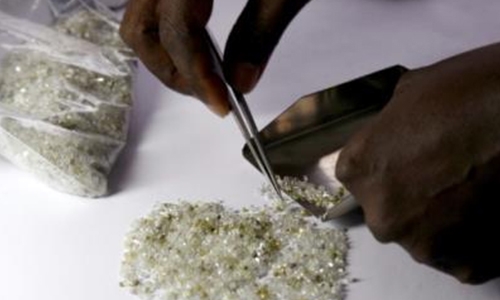 Zimbabwe yesterday slammed a US decision to ban its exports of uncut diamonds, saying claims of the gems being extracted by forced labour at a major mining area had a “political agenda”. “We have never had anyone, let alone children, forced to work in Marange diamond fields,” Justice Minister Ziyambi Ziyambi told AFP.

“Zimbabwe has one of the best labour laws, which don’t allow the practise of forcing people to work against their will. “We believe there is a political agenda hidden behind the ban,” he said. On Tuesday, US Customs and Border Protection (CBP) announced it had issued a socalled withhold release order barring the trading of rough diamonds from Zimbabwe.

At issue are the diamond fields in Marange, in eastern Zimbabwe, which have been a prolific source of diamonds since 2006. Washington says the smallscale producers who predominate in these fields use coerced labour. Zimbabwean government spokesman Nick Mangwana said the accusation was either “mischievous or simply ignorant.”