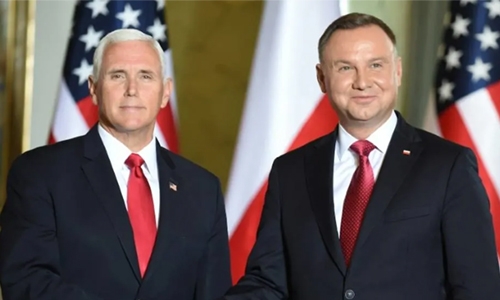 Poland’s president yesterday opposed a proposal by US President Donald Trump to reintegrate Russia into the elite G7 group, insisting that “business as usual” was unacceptable given Moscow’s occupation of Ukrainian territory. “Should we have a business as usual approach towards Russia? ...

I believe that we cannot under the current circumstances,” President Andrzej Duda told reporters at a joint press conference with visiting US Vice President Mike Pence. The issue of Russia’s reintegration into the G7 group of the world’s rich nations divided leaders at its summit last week in France, as Trump pushed for Moscow to be allowed back after its 2014 expulsion. Russia was kicked out of what was then the Group of Eight after it annexed Ukraine’s Black Sea peninsula of Crimea, a move never recognised by the international community.

But Trump, who will host next year’s G7 summit, said he would invite Russia to the event, a move supported by France but criticised by Britain and Germany. Poland is not a G7 member. Speaking alongside Duda on Monday, Pence struck a different tone, insisting that it was crucial to “remain vigilant” towards Russia. He accused Moscow of attempting to meddle in elections and use its oil and gas supplies to “divide our alliance”, in an apparent reference to the controversial Nord Stream 2 pipeline set to send Russian gas to Germany.

Washington and Warsaw, among others, oppose the pipeline, fearing it will increase Europe’s reliance on Russian energy supplies which Moscow could then use to exert political pressure. Poland has long cultivated close ties with the US, which it regards as the primary guarantor of its security within the NATO alliance and as a bulwark against Russia, its Soviet-era master with whom tensions still run high.

Pence confirmed that the US and Poland would later yesterday sign a joint declaration on digital infrastructure security. “This declaration, we believe, will set a vital example for the rest of Europe on the broader question of 5G,” he told reporters. The US is pressing allies, with mixed success, to reject Chinese 5G technology, especially from the giant mobile phone company Huawei. Washington fears that Huawei will provide Beijing with a way to spy on communications from the countries that use its products and services.

Pence also said he had discussed the “importance of judicial independence” with Duda in the wake of a string of controversial judicial reforms pushed through by Poland’s right-wing government since taking office in 2015. The EU has slammed the measures as a threat to the rule of law and ultimately democracy. Pence also said that Poles travelling to the US would soon be covered by Washington’s visa-waiver programme, allowing them unrestricted entry. “We are literally weeks away from being able to make that a reality,” Pence said.

The US vice president travelled to Warsaw for Sunday ceremonies marking 80 years since the outbreak of World War II. President Trump had planned to attend the war commemorations but cancelled at the last minute to monitor Hurricane Dorian. Without going into detail, Trump confirmed on Sunday in Washington that he had only postponed his trip and would travel to Poland “soon”.