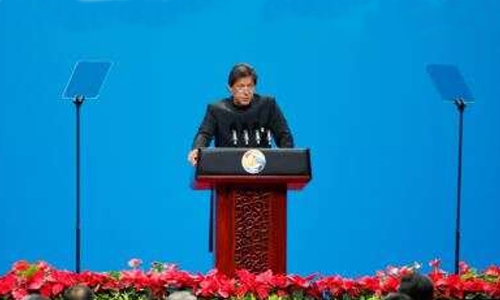 Pakistan’s government targeted a sharp hike in tax revenues yesterday as it presented plans for next year’s budget, amid shouts and protests from opponents in parliament angry at measures set under pressure for an IMF loan agreement. Seeking final approval for an International Monetary Fund bailout, the government had already prepared the ground for widespread belt-tightening. But the goals unveiled by Revenue Minister Hammad Azhar for the fiscal year to June 2020 underlined the scale of the economic challenges it faces.

He forecast a budget deficit of 7.1 per cent of gross domestic product, after the gap in the current year blew out to 7.2pc. He also targeted federal tax revenues of 5.55 trillion rupees ($36.80 billion), up 25pc and driven by a lower introductory threshold for income tax and a clampdown on tax evasion. The government failed to hit the last fiscal year’s goal of 4.44 trillion rupees. “Until we improve our tax system, Pakistan will not progress,” Azhar said.

Spending is set to rise to 7.02 trillion rupees, 30pc above last year’s target, he said. Amid chaotic scenes in parliament, opposition lawmakers brandished banners reading “Say no to IMF budget!” and shouting slogans against the government. Prime Minister Imran Khan’s administration has been forced to seek what would be Pakistan’s 13th IMF bailout since the late 1980s to stabilise an economy that has seen growth plunge while teetering on the verge of a balance of payments crisis.

The rupee has lost about a third of its value this year and inflation has jumped above 9pc. In April, the government secured a provisional $6 billion IMF loan, but it is contingent on measures being taken to cut a budget gap that the Fund forecast at 7pc in 2018/19.

Handicapped by a weak fiscal system, Pakistan has historically struggled to collect tax revenues. Only 1.8 million people file income tax returns in a fast-growing nation with a population of 208 million and a large informal economy. The agricultural sector, dominated by big, politically powerful landowners, makes up around 20pc of the economy but accounts for only 0.22pc of direct taxes, according to the World Bank.

With households increasingly squeezed by high prices for food, energy and household goods, the government has faced increasing anger and Azhar announced a 10% cut in ministerial salaries and an increase in the minimum wage. Pakistan expects to raise $2 billion from the sale of two liquefied natural gas (LNG) power plants, and another $1 billion from the auction of mobile licenses, he said. The government has already slashed its year to June 2019 growth forecast to 3.3pc from the 6.2pc predicted at the time of the last budget.

The IMF’s estimates growth of around 2.9pc. For the coming year to June 2020, the government expects growth at 4pc. Under the terms of the IMF loan, the government is also expected to let the rupee depreciate to help tackle an unsustainable current account deficit and aim for a primary budget deficit - excluding debt servicing costs - of 0.6pc. Despite promises the army would rein in spending and widespread expectations that the military’s hefty budget would be cut, the spending target for the armed forces was increased by 4.5pc to 1.15 trillion rupees.