For women who made Bahrain proud! | THE DAILY TRIBUNE | KINGDOM OF BAHRAIN 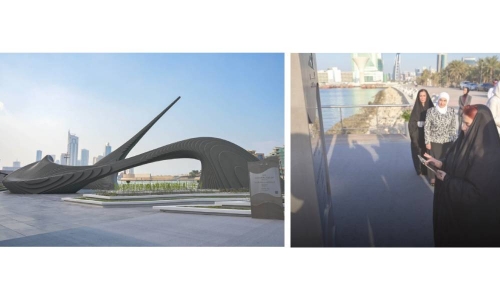 People from all walks of life came together yesterday to celebrate the achievements and contributions of Bahraini women to the Kingdom’s comprehensive development on the occasion of Bahraini Women’s Day, celebrated each year on December 1.

Marking the day, Her Royal Highness Princess Sabeeka bint Ibrahim Al Khalifa, Wife of His Majesty the King and President of the Supreme Council for Women, had on Wednesday inaugurated a memorial “Athar” celebrating Bahraini women’s contributions throughout the Kingdom’s history.

The Supreme Council for Women and the Bahrain Authority for Culture and Antiquities launched the “Athar” project on Bahraini Women’s Day 2017 by holding a competition inviting proposals for a monument to celebrate Bahraini women.

Team“Athar” won that competition, with SCW naming the monument after them. In a statement yesterday, Shaikh Salman bin Khalifa Al Khalifa, the Minister of Finance and National Economy, expressed his pride in the achievements of Bahrain women and their contributions to the comprehensive development of Bahrain.

Fawzia bint Abdullah Zainal, former Speaker of the House of Representatives, said the strides of Bahrain in the empowerment and advancement of women have made it a centre for expertise in women’s affairs.

“The royal care and unwavering support strengthened the status of the women in the society and consolidated their progress,” said His Highness Shaikh Isa bin Salman bin Hamad Al Khalifa.

The Chairman of the Board of Trustees of the Isa bin Salman Educational Charitable Endowment congratulated Bahraini women for their contributions to the comprehensive development of the Kingdom and wished them further progress and prosperity. The works of SCW, Shaikh Isa said, enabled Bahraini women to remain active in the national building process.

He also hailed the support and commitment of His Royal Highness the Crown Prince and Prime Minister in promoting Bahraini women across various sectors.

Fatima bint Jaafar Al-Sairafi, the Minister of Tourism, expressed her pride in the status of Bahraini women and vowed to continue efforts to create more jobs for them in the sector.

Al-Sairafi hailed the Supreme Council for Women, headed by Her Royal Highness, for celebrating Bahraini women’s contributions to the nation building process.

34% of employees are women: Works Minister

Ibrahim bin Hassan Al-Hawaj, the Minister of Works, expressed pride in the role of Bahraini women, pointing out that 34% of the employees in the ministry are women.

The minister said women enjoy 50% of the senior position and 51% of executive-level roles in the ministry. Dr Lolwa Al-Mutlaq, President of the Bahraini Association of Administrators, said the day represents an opportunity to recall the efforts of Bahraini women and their contributions.

The CEO of the Information and eGovernment Authority said the national occasion provides an opportunity to pay tribute to all the honourable and unprecedented achievements of women locally, regionally and globally. Mohammed Ali Al Qaed also praised the continuous efforts of SCW to ensure equal opportunities.

“Around 48% of the employees in iGA are women, where they also enjoy 40% of the leadership positions,” he said. His Highness Shaikh Mohammed bin Salman bin Hamad Al Khalifa said the achievements of Bahraini women are a source of great pride, highlighting the role of the Supreme Council for Women in implementing programmes that encourage and promote women’s contributions.

Wael bin Nasser Al-Mubarak, the Minister of Municipal Affairs and Agriculture, hailed Bahraini women are a crucial component of Bahrain’s development and an essential part of Team Bahrain. He also pointed out that 51% of the employees in the ministry are women.