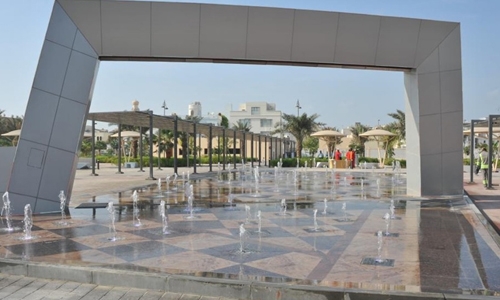 More than 7,000, or an average of 1,750 people per day, are visiting the Muharraq Grand Park since its opening Thursday last week.

The park, which is located on an area of 90,692 square metres, is part of the Ministry of Municipalities Affairs and Urban Planning and Muharraq Municipality’s joint development project to make it a model in preserving the environment and increasing the green area.

With an increasing number of visitors, the municipality is working diligently to provide them with the necessary needs as well as ensure cleanliness in the area.

The Muharraq Municipality is continuing to develop parks and gardens according to the highest standards that guarantee their sustainability and meet the requirements of urban development in the Kingdom of Bahrain.

The implementation of the Muharraq Grand Park development project comes within the programme of the government headed by His Royal Highness Prince Salman bin Hamad Al Khalifa, the Crown Prince and Prime Minister.

It is also within the Kingdom’s Economic Vision 2030, which is based on the sustainability of vital projects, such as parks which are important landmarks historically, specifically in the Muharraq Governorate.

During the successful implementation of the project development phases, all the needs of the people in the park were taken into account in coordination with the Muharraq Municipal Council.

The size of the play areas is about 2,000 square metres covered with a rubber floor according to international standards that ensure the safety of children.

The park contains about 23 exercise machines and most of them are placed under a large and shaded area, while the others are distributed along the walkway to allow everyone to warm up before exercising.

The process of greening and afforestation in the garden also took into account the cultivation of various types of trees that suit the Bahraini climate to improve the climate and reduce temperatures, such as the cultivation of date palms, fruit trees, shade trees and ornamentals.