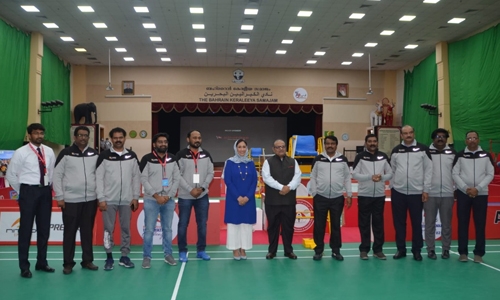 The main draw is from today, and all matches up to the pre-quarterfinals will be complete.

All the quarterfinals match in all five categories will be complete by tomorrow.

All semifinals on Friday and finals in all disciplines will be held on Saturday.

The BIC is the highest category event that is held in Bahrain.

The tournament is sanctioned by the Badminton World Federation (BWF) which carries world ranking points and a total prize pool of USD 15,000.

This year’s event has seen the biggest turnout in the tournament’s history of nearly 200 players from 25 countries. Players from Indonesia and India form the biggest contingents.

This year the organisers are also having a small contingent from across the Atlantic and Pacific oceans with players from the US and Australia. The remaining players are from Russia, Indonesia, Egypt, Singapore, Hong Kong, Sri Lanka, Malaysia, Estonia, Maldives, Canada, Syria, Iraq, UAE, Pakistan, Kingdom of Saudi Arabia and South Africa.

The top seeds for the singles events are top 100 ranked players Sergey Sirant (Russia) and Aakarshi Kashyap (India) in Men’s and Women’s Singles, respectively. The doubles events will see top seeds from a range of countries including Sri Lanka, Belgium and Egypt. In Women’s Singles, a special mention for Bayrak Ozge (Turkey), a former champion, fan favourite and a regular fixture at these events.

Entry is free on all days as per COVID-19 protocol while the BKS welcomes all badminton enthusiasts in the Kingdom to support the event and witness high-quality badminton action.