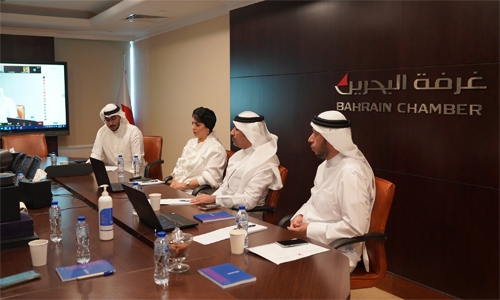 It was in line with their efforts that aim at enhancing the vigour of the market in cooperation with the relevant government and civil institutions and in a bid to allow their members a platform to voice their concerns and communicate their sentiment to the relevant bodies.

The meeting featured LMRA’s Client Care Director Eman Shebeeb, Acting Director of Labour Inspection Hamad Al Mulla and Head of Labour Inspection Jaffar Abdulhasan. Commencing the meeting, LMRA officials highlighted its role and services, stressing that preserving the rights and responsibilities of employers and workers is a top priority. They pointed out the E-services offered by the Authority, and shed light on its recent initiatives including the wage protection scheme, and the voluntary insurance for domestic workers.

Participants representing business owners and employers addressed a number of issues of concern, calling to tighten measures on illegal workers, allowing a grace period for business establishments to regulate and rectify any violation prior to being referred to the Public Prosecution, and to update rules and regulations with regard to workers between-jobs movement.

Cooperation agreements to support businesses and economic growth in Bahrain