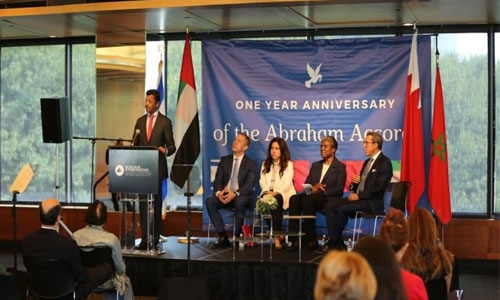 The bilateral relations between Bahrain and Israel have been progressing remarkably following the signing of several memoranda of understanding in various fields.

This has led to establishing promising cooperation that contributes positively to the peace and development process in the region.

Bahrain’s Permanent Representative to the United Nations in New York Jamal Faris Al Ruwaie made the remarks as he participated in the celebration of the first anniversary of the signing of the historic peace agreements between the Kingdom and Israel.

The arrival of Bahrain’s Ambassador to Israel and the expected official opening of the Bahraini embassy in Tel Aviv constitute another milestone in the growing bilateral relations, he added.

Al Ruwaie highlighted the approach of Bahrain under the leadership of His Majesty King Hamad bin Isa Al Khalifa and of His Royal Highness Prince Salman bin Hamad Al Khalifa, the Crown Prince and Prime Minister, based on promoting peace in the region and on the values of coexistence, mutual respect and true cooperation.

Al Ruwaie expressed appreciation for the US role in taking the historic step on the path to peace, security and real and lasting prosperity in the region and stressed Bahrain’s keenness to advance the values of coexistence, tolerance and harmony for the good of humanity.

He also affirmed that based on its belief that a just and comprehensive peace is the best guarantee for the future of the peoples of the region, Bahrain will continue to work with its international partners to achieve the desired peace and meet the peoples’ aspirations for security, stability and prosperity.