; Bahrain pushes for joint action with Pakistan | THE DAILY TRIBUNE | KINGDOM OF BAHRAIN 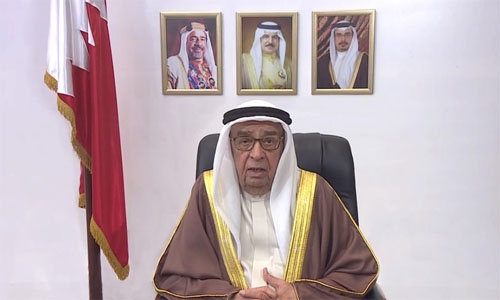 His Highness the Deputy Prime Minister, Shaikh Mohammed bin Mubarak Al Khalifa, has emphasised the importance of joint action between the Kingdom of Bahrain and Pakistan to maintain regional and international security and stability.

This comes as the Deputy Prime Minister received in his office at Gudaibiya Palace the Pakistani Foreign Affairs Minister, Shah Mahmood Qureshi, on the occasion of his visit to the Kingdom to participate in the work of the Bahrain-Pakistan Joint Committee. The meeting was held in the presence of Foreign Affairs Minister Dr Abdullatif bin Rashid Al Zayani.

A number of regional and international issues of common interest between the two countries were also reviewed. HH Shaikh Mohammed bin Mubarak welcomed Minister Qureshi, stressing that the visit comes within the framework of the historical relations and cooperation existing between the two countries in light of their keenness to strengthen and develop them in their various fields.

The Pakistani Minister expressed his happiness to visit Bahrain, stressing that the convening of the Bahrain-Pakistan Committee reflects the keenness of the two friendly countries to develop and strengthen their relations and cooperation to serve their common interests, praising the development and growth witnessed by the Kingdom under its wise leadership.