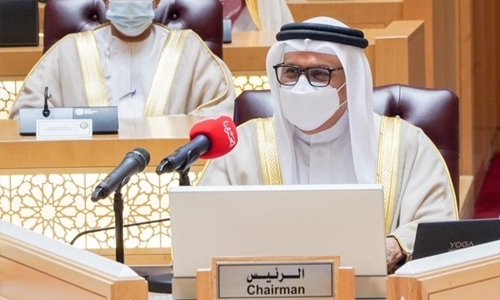 The meeting was held at Prince Saud Al Faisal Conference Center, at the headquarters of the GCC Secretariat General in Riyadh, Saudi Arabia. It convened in the presence of the GCC Ministers of Foreign Affairs, with the participation of GCC Secretary-General, Dr Nayef Falah Al Hajraf.

In his inaugural speech, Minister Al Zayani congratulated the GCC countries’ leaders and citizens on the 40th anniversary of the joint Gulf action, noting that this march is proceeding with determination and confidence towards its lofty goals to preserve the security and stability of the GCC states and the interests of their people.

He described the GCC outstanding achievements as an impetus towards greater solidarity and cooperation, and to continue the efforts with sincerity and dedication to further boost Gulf integration in various fields.

He said that the challenges facing the region cast a shadow over the course of Gulf cooperation, and require vigilance, caution, hard-working, and permanent cooperation to preserve the security and stability of the GCC member states as well as defend their sovereignty, independence and supreme interests.

The Foreign Minister added that in light of the political and security conditions in the region, and regional challenges, the Palestinian cause remains a major issue and the key to security and peace in the region.

He pointed out the need for continued cooperation to support the efforts of the Palestinian authority, alleviate the suffering of the brotherly Palestinian people.