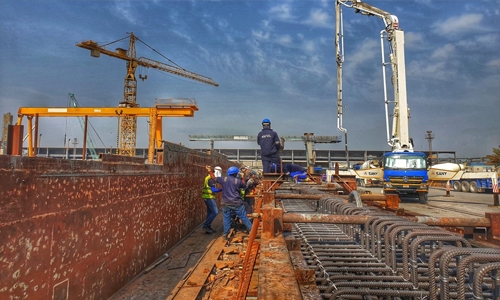 About 35% of works on the 17th Bridge development project on Umm Al Saad Street, south of Sitra, has been completed. The foundation, casting and reclamation works for the main parts of the first bridge are almost done.

The Director of Roads Projects and Maintenance Department at the Ministry of Works, Municipalities Affairs and Urban Planning, Engineer Sayed Badr Alawi, expects the project to be completed during the last quarter of this year.

Eng. Alawi pointed out that the work also includes converting a number of service lines, improving lighting, providing channels for ground services, installing steel and concrete barriers, providing traffic signs, and painting landlines to raise the level of traffic safety. It is part of a series of important projects in the road sector due to its connection with the existing expansion work of the Bahrain Petroleum Company refinery, and its strategic and national importance to the Kingdom and Bapco.

It will also provide the necessary space under the bridge to extend other lines of the plant development project. Bapco refinery, in addition to the bridge, will have a greater width of 28 metres to create a space for the future expansion of the street to three lanes in each direction.

It will serve the industrial areas next to the bridge, and a number of people in that area, such as residents of Umm al Bayadh. The project was awarded by the Board of Tenders to Sayed Kazem Al Dirazi and Sons Contracting Company, with a total value of BD792,992.