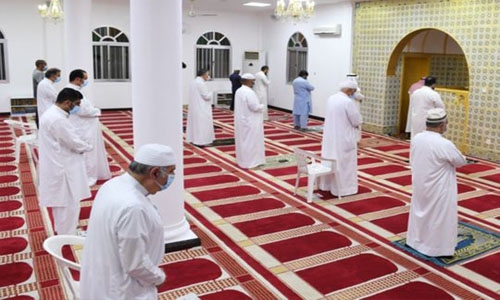 The Ministry of Justice, Islamic Affairs and Endowments have closed three mosques for flouting the precautionary measures to limit the spread of the novel coronavirus (COVID-19).

The move was taken as part of the efforts of the National Medical Taskforce for Combatting Coronavirus to trace active cases and their contacts so as to ensure the safety and health of everyone.

The three mosques violated the established health precautionary measures, as those in charge of them allowed the entry of non-vaccinated worshipers, including active cases who are supposed to be under quarantine and not to contact others.

The decision was taken in view of the laxity of those in charge of the mosques in implementing the required precautionary measures, especially those related to examining the worshippers' vaccination certificates and keeping a safe distance between those performing the prayers, the Ministry said.

The ministry added that it had consulted with the National Medical Taskforce before announcing the closure of the mosques.

The time will be used to enable the relevant teams to carry out the contact tracing and the sanitisation process. A team will also make sure that the precautionary measures are properly followed in the mosques.

The Justice Ministry also announced the re-opening of four mosques that had been temporarily closed for failing to comply with the precautionary measures.

The decision to re-open the four mosques was taken following the completion of their sanitisation and contact tracing process. The mosques also put in place the required health measures.

The Justice Ministry urged everyone, particularly those responsible for mosques, to assume their religious and national responsibilities, through their full commitment to the health requirements and compliance with the precautionary measures to protect the health of the citizens and residents.

The Ministry indicated that contact tracing efforts have shown that laxity in following the recommended precautionary measures has led to the spread of infections among some worshippers.