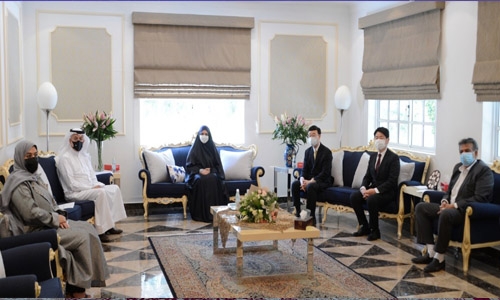 Bahrain Garden Club has announced the winners of the 55th Competitions 2021 in a ceremony held at Al Jasra Organic Farm.

Present in the occasion were Shaikha Maram bint Isa Al Khalifa, Secretary-General of the National Initiative for Agricultural Development; Japan Ambassador Hideki Ito; Yasser Abdulrahman Alraee, Managing Director of Riffa Views; Anoop Kewalaram, representative of the Bahrain-Japan Business and Friendship Society; members of the Club’s board of directors; and the winners.

Shaikha Maram congratulated the winners in all categories and expressed her wishes of success to all participants in the upcoming competitions.

She commended the club’s efforts in holding the ceremony under strict precautionary measures imposed by the COV- ID-19 pandemic.

The situation necessitated hosting the ceremony privately after it was held over the past years as a major event on the sideline of the Bahrain International Garden Show organised annually under the auspices of His Majesty the King Hamad bin Isa Al Khalifa.