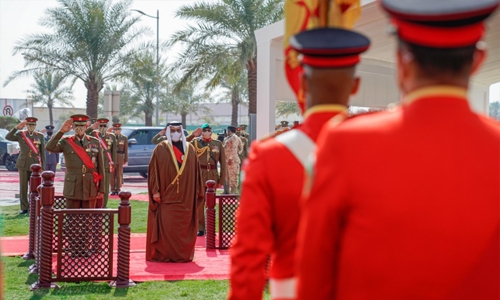 His Royal Highness welcomed the inauguration as a further example of innovation and development of the Bahraini healthcare sector, under the leadership of HM the King.

His Royal Highness paid tribute to the late HRH Prince Khalifa bin Salman Al Khalifa who played a central role in the development of this centre.

His Royal Highness noted the centre will transform Bahrain’s cardiac care facilities and provide world-class services for patients, praising, in particular, the BDF for its efforts and contributions to developing the Kingdom’s health care sector alongside all other work in service to the Kingdom and its citizens.

His Royal Highness thanked the UAE for the support and cooperation it has extended to Bahrain through various initiatives, noting this reflects the deep, historic bonds which tie the two countries together.

Concluding his remarks, His Royal Highness expressed his thanks to Dr. Resan Hmood Al-Badran, Executive Director of the Mohammed bin Khalifa bin Salman Al Khalifa Cardiac Specialist Centre, and all medical and administrative staff for their commitment to providing the highest levels of health care services.

Brig. Dr. Fuad Abdulqader Mohamed Saeed, Deputy Executive Director for technical affairs at the Specialist Centre, thanked His Royal Highness for inaugurating this world-class facility, which takes place on the 53rd anniversary of the establishment of the BDF.

Later, His Royal Highness watched a short film on the construction of the centre, before touring the premises and unveiling a commemorative plaque.

His Royal Highness then received two commemorative gifts, one from HE Field Marshal Shaikh Khalifa bin Ahmed Al Khalifa, Commander in Chief of the BDF, and one from Dr. Resan Hmood Al-Badran, Executive Director of the Specialist Centre.

A number of their Highnesses and Excellencies, senior officials and ministers and senior BDF officers, were also in attendance for the inauguration.