Welcome to the new passenger terminal at the Bahrain International Airport! | THE DAILY TRIBUNE | KINGDOM OF BAHRAIN 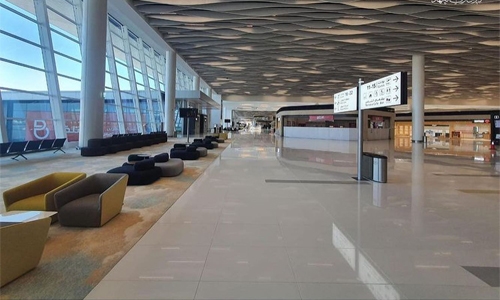 Welcome to the new passenger terminal at the Bahrain International Airport!

The Ministry of Transportation and Telecommunications and Bahrain Airport Company (BAC) announced that all the airport’s facilities are ready, and preparations to welcome passengers are complete.

The transfer to the new facility marks the dawn of a new era for the Kingdom of Bahrain’s aviation sector.

Transportation and Telecommunications Minister and BAC Chairman, Eng. Kamal bin Ahmed Mohammed, noted that the transfer marks a major step for the Kingdom under the leadership of His Majesty King Hamad bin Isa Al Khalifa.

With a focus on safety, luxury, and environmental sustainability, the new airport adheres to international aviation guidelines.

It will also help to attract well-known brands that will enhance travellers’ shopping experiences.

The new terminal is four times the size of the old one and designed to deliver a more personal, Bahraini feel.

Equipped with the latest technologies in the market and supported by new infrastructure, it will increase the airport’s capacity to 14 million passengers per year, delivering a hassle-free airport experience and the highest standards of luxury.

The Minister praised HRH the Crown Prince and Prime Minister’s contributions to the project and thanked him for his guidance, highlighting his contributions towards the Kingdom’s many outstanding achievements in pursuit of its Economic Vision 2030, and bringing the Airport Modernization Program (AMP) closer to completion.

Launched in February 2016, the AMP is the largest investment in Bahrain’s aviation sector to date and one of the most important national projects in the Kingdom’s history.

Minister Mohammed also expressed his satisfaction with the progress made during the first phase of the new terminal’s development, and the ‘Team Bahrain’ spirit that has characterised everyone involved in this project since its inception.

Minister Mohammed said: “I would like to thank our strategic partners, contractors, all companies working in Bahrain International Airport, and all parties involved for their strong support for this national project. We are very grateful for their assistance and contributions throughout, which were vital to the smooth and successful launch of the airport’s new infrastructure. Their contributions helped to ensure the project’s on schedule and on budget completion, without disrupting operations at the legacy airport, which has served the Kingdom efficiently for decades.”

BAC Chief Executive Officer Mohamed Yousif Al Binfalah said: “This milestone is the culmination of years of careful planning and hard work. It marks the start of an exciting new chapter in the Kingdom’s rich aviation history and positions BIA as the most modern boutique airport in the region.”