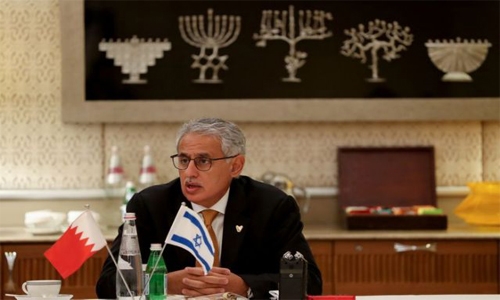 Bahrain yesterday welcomed Israeli companies to the Kingdom assuring that they will enjoy the same rights and conditions as “any other international company in Bahrain.”

“We will treat Israel and Israeli companies like we do Italian or German or Saudi companies, for that matter,” Zayed bin Rashid Al Zayani, the Industry, Commerce and Tourism Minister said during a visit to Israel.

He added: “Israelis are as welcome as any other international company in Bahrain.” The minister voicing his openness to Israeli products said that Israeli products from the West Bank, East Jerusalem and the Golan Heights could be labelled “Made in Israel”.

Bahrain and the United Arab Emirates formalized ties with Israel on September 15, in a US-sponsored deal billed by the Gulf countries as being made possible by Israel’s shelving of a plan to annex West Bank settlements.

The Trump administration last month removed US customs distinctions between goods made within Israel and in settlements. Israel expects trade with Bahrain worth around $220 million in 2021, not including possible defence and tourism deals.

“We are fascinated by how integrated IT and innovation sector in Israel has been embedded in every facet of life,” he said.

He played down speculation in Israel that its citizens visiting Bahrain could be at risk of reprisals for the assassination last Friday of a top Iranian nuclear scientist, which Tehran blamed on Israeli agents.