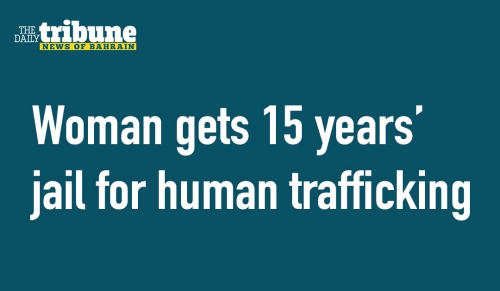 The Fourth High Criminal Court sentenced a Thai woman to 15 years in jail and deportation after finding her guilty of human trafficking. According to investigations, the defendant forced a fellow Thai woman to practise prostitution for around four months, from August to November of 2019. She recruited the victim by promising a waitressing job with good pay at reputed hotels and night clubs here.

Court files showed that the defendant sent the victim a flight ticket, after completing all formalities for a visit visa to Bahrain, with the assistance of a local documents clearance office. Horrific Ordeal! The victim spoke before the court about her ordeal, stating that she was shocked upon her arrival to Bahrain to know that she will be working in the flesh trade, hopping from one nightclub to another to search for customers.

The woman said she was forced to have sex with an average of three customers from different nationalities in a day, and explained that she was forced to offer sex for a short period in return of BD20, while the defendant would collect BD60 from the customer for a full night of service.

The woman told the judges that she escaped one night with the assistance of a customer, who she said was having difficulties communicating with her. She said she used translation software to convey to him that she was trapped and forced to practise prostitution. According to her statements, the customer booked a cab and took the woman to the nearest police station and reported the matter.

An investigation led to the identification and arrest of the defendant, who was referred to the Public Prosecution for interrogation. The prosecution charged the defendant with human trafficking by restraining the freedom of the victim and forcing her into vice.